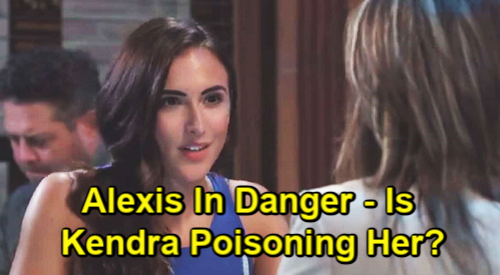 General Hospital (GH) spoilers tease that Alexis Davis (Nancy Lee Grahn) could be in terrible danger. She’s been working with a personal trainer lately named Kendra Lennon (Michelle Argyris), who seems nice enough. Kendra has been doing a complete physical fitness overhaul of Alexis’ life, and it’s been good for Alexis – she’s out running regularly, eating cleaner, and generally getting fit. But something seems lurking beneath the surface with Kendra.

GH viewers will remember that Kendra appeared to become interested in Alexis after Shiloh Archer (Coby Ryan McLaughlin) made a call, which seemed to be to Kendra, and told her that there was something she should know. Shortly thereafter, Kendra approached Alexis at The Metro Court about her personal training services. And it seems that Kendra has an agenda – to infiltrate Alexis’ life.

GH buzz is that Kendra may be the sister of Kiefer Bauer (Christian Alexander). Given that Kristina Corinthos-Davis (Lexi Ainsworth) recently seemed to recognize Kendra and think that she looked awfully familiar, this is a distinct possibility.

Kiefer Bauer Was The Subject Of Kristina Corinthos’ DOD Pledge

Of course, Kiefer was the subject of Kristina’s pledge to Shiloh when she was going to join “The Trust” at Dawn of Day, and GH viewers will remember that Kristina told Shiloh that Alexis deliberately ran down Kiefer with her car.

If Shiloh relayed the contents of Kristina’s pledge to Kendra, and Kendra is indeed Kiefer’s sister, then she probably has a major grudge against Alexis. She may well be after revenge, but what will she do to harm Alexis? Well, one possibility is that Kendra will go after someone Alexis loves.

But another possibility is that Kendra will go directly after Alexis and seek to do her physical harm. Recently, Kendra gave Alexis a big canister of a dietary supplement power that mixes with water to form a health drink. Kendra wants Alexis to drink one of the drinks each day as a health boost, and Alexis proceeded to mix up a batch for herself right then and there.

Cyanide Poisoning Is Difficult To Diagnose Or Detect Over Time

Kendra did the same and appeared to drink a little of the drink herself, but it didn’t seem like she took a very big drink, if she actually ingested any at all. Could Kendra have given Alexis a tainted batch of the powder – perhaps a poisoned batch that will make Alexis sick over time? Cyanide poisoning, when done slowly over time, is difficult to detect or diagnose, so perhaps that’s what’s going on here.

GH spoilers say that the relationship between Alexis and Kendra ultimately will not be good for Alexis, so it seems that something ominous is going to happen in their relationship, and there was certainly a lot of focus on that drink powder. It will be interesting to see whether Alexis ends up having any physical symptoms soon.

Do you think that Kendra is trying to poison Alexis? Stay tuned to the ABC soap and don’t forget to check CDL often for the latest General Hospital spoilers, updates, and news.