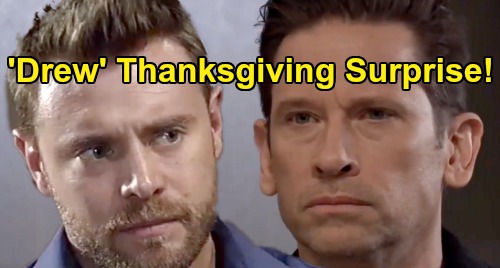 General Hospital (GH) spoilers tease that “Drew Cain” aka Franco Baldwin (Roger Howarth) will fill Kim Nero (Tamara Braun) in on his new perspective. Just because he feels like “Drew” doesn’t mean he is. He’s living in Franco’s body and has Franco’s DNA. The memories don’t make the man since Franco’s memories could still be buried underneath. This life just isn’t “Drew’s” to keep.

“Drew” will try his best to explain all that to Kim, but she’s sure to be an emotional wreck. Kim may feel like “Drew’s” been playing games with her heart. “Drew” made his move with Kim quickly after he first took over Franco’s mind. He was adamant that he was “Drew” now and wanted to build a brand-new life with Kim.

Of course, “Drew” hurt Kim after his court victory by suggesting she needed to stay in Port Charles and get the help she needed. Kim felt like “Drew” only wanted her if she was “fixed.” She eventually admitted she just couldn’t stand being in PC any longer. There are too many Oscar Nero Quartermaine (Garren Stitt) memories everywhere she turns.

“Drew” decided to leave with Kim and now he’s changed his mind, so she’s bound to be furious. Kim may wonder why “Drew” keeps messing with her like this. She already told him she was willing to go alone, but he got her hopes up only to dash them again. Kim was wrong to enter a relationship with Elizabeth Baldwin’s (Rebecca Herbst) like it was nothing, so maybe it’s a little karma.

Nevertheless, Kim won’t appreciate how “Drew’s” been jerking her around. Part of her may wish “Drew” had never come back to her – not like this anyway. However, another part of her may feel like “Drew’s” just being the man she fell in love with. “Drew” is finally showing a bit of that heroic side we all knew he had in him. Kim may not like “Drew’s” decision, but she probably won’t think it’s out of character for “Drew” to make a sacrifice.

Next, it’ll be Monica Quartermaine’s (Leslie Charleson) turn to get the news. She’ll learn “Drew” intends to stay in town and will likely have the memory procedure done. GH fans know Monica fought for “Drew” at his hearing, but she should understand why he’s making this choice. She’ll surely proud of “Drew” for giving Franco back what’s rightfully his.

General Hospital spoilers say danger is coming for “Drew” at some point – most likely because Peter August (Wes Ramsey) doesn’t want him to have this procedure. For now, “Drew” may have a surprise for Liz. She’ll be taken aback on Thanksgiving, so “Drew” may show bearing pie and willing to make an effort. It’d be a nice treat for Liz and her boys, even if “Drew” can’t remember them yet.

If there’s still part of “Drew” that’s on the fence about this memory procedure, a heartwarming “Friz” family Thanksgiving could be the final nudge he needs. General Hospital spoilers say some great scenes are on the way. We’ll give you updates as other GH details emerge. Stay tuned to the ABC soap and don’t forget to check CDL often for the latest General Hospital spoilers, updates and news.