General Hospital Spoilers: Liz’s Last-Minute Terror, Begs ‘Drew’ Not to Have Procedure After All? 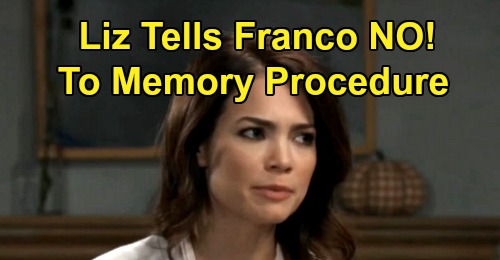 General Hospital (GH) spoilers tease that Elizabeth Baldwin (Rebecca Herbst) may face some doubts. GH fans know “Drew Cain” aka Franco Baldwin (Roger Howarth) has changed his mind. He’s realized that his life belongs to Franco, no matter what his memories might tell him. This is Franco’s body and he deserves a shot at returning to it.

After all, Franco’s memories are still buried in there somewhere. “Drew” just needs a procedure to hopefully reverse his memory issues and bring Franco back to his family. Of course, some less than desirable outcomes could result from that procedure.

Franco could become Franco again, but he could also find himself in a vegetative state. Then again, there could be no change at all. Franco’s “Drew” memories could even intensify, so there are certainly ways this could go wrong for Liz and her boys. They all want Franco back, but at what cost?

Is there a chance Liz will have a change of heart like “Drew” did? It’s reasonable considering how much Liz loves Franco. She’s been fighting hard for “Drew” to have this memory procedure, but it’s one that could kill him. If Franco lands in a permanent coma because of this, he would eventually be taken off life support.

Liz would lose Franco forever and would have to live with that guilt. It would be tough for Liz to look in her kids’ heartbroken eyes and tell them Franco is dead. If the procedure ends in disaster, it could mean planning a funeral and burying Franco. This is something Liz needs to mull over carefully! It’s easy to imagine Liz finally realizing the true ramifications of this and urging “Drew” not to go through with it.

General Hospital viewers could see Liz and “Drew” swap places in this argument. Liz had been trying to convince “Drew” to submit to the procedure, but now she may have to talk him out of it. That could be difficult since “Drew’s” mind seems to be made up. However, at least the burden of guilt would be lifted off Liz. She won’t be responsible for pressuring “Drew” if she shifts gears and begs him not to go through with the procedure.

It’s also possible Liz will convince “Drew” to delay the procedure, which would be an interesting way to take this story. Perhaps Liz could count on bringing Franco’s memories back by spending time together. She might suggest they should try jogging things through familiarity before they do something so drastic.

Whatever the case, Liz might another tactic once Kim Nero’s (Tamara Braun) out of the way. Kim’s exit will leave Liz free to pull “Drew” closer and hopefully help him remember one way or another. General Hospital spoilers say some hot drama’s brewing, so stay tuned. We’ll give you updates as other GH news comes in. Stick with the ABC soap and don’t forget to check CDL often for the latest General Hospital spoilers, updates and news.