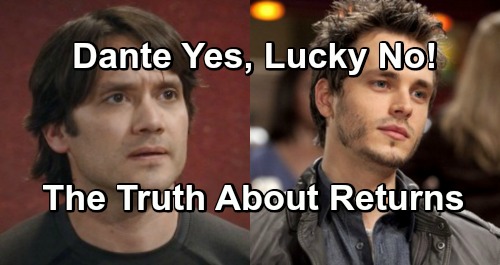 General Hospital (GH) spoilers tease that Lulu Falconeri (Emme Rylan) will begin her slow recovery. It’ll take some time to get her back to her old self, but Laura Webber (Genie Francis) will support her daughter. However, that’s not the same as having a devoted husband by her side. Lulu really needs Dante Falconeri (Dominic Zamprogna) to come home and be there for her.

GH fans know Lulu was already struggling to hold down the fort. Charlotte Cassadine (Scarlett Fernandez) was bullying her cousin, Aiden Webber (Jason David), for a while. Now Charlotte’s been cheating off another kid’s paper. Lulu isn’t truly on her own since Valentin Cassadine (James Patrick Stuart) and Nina Reeves (Michelle Stafford) are involved, but that honestly just adds to her stress!

As for Rocco Falconeri (O’Neill Monahan), who knows where that kid is? Rocco is presumably off being neglected in his room all the time. Regardless, Rocco doesn’t have his dad and Charlotte doesn’t have her stepdad. Lulu’s been having to handle all the parenting and loneliness at the Falconeri house.

Now Lulu will have the added stress of trying to recover from her injuries and fearing that her attacker might strike again. Since Lulu won’t remember Ryan Chamberlain (Jon Lindstrom) came after her, she’ll have no way of knowing who the killer is or identifying him if he pops up. It’s clear that Dante needs to be summoned ASAP. Unfortunately, it seems Dante is in some trouble of his own.

General Hospital spoilers say Dante has likely been kidnapped. Based on some leaked casting info, it appears Dante is being held hostage. Some scenes are coming up that feature a prisoner along with some guards. Dante may need some help to make his escape, so who will step up? Time will tell, but there’s one option that we can go ahead and shut down.

Some websites are falsely suggesting that Laura will send Lucky Spencer (Jonathan Jackson) to find Dante, but that just doesn’t make any sense. It’s not like he’s best buds with Dante or even close to Lulu for that matter. How could he be when Lucky’s never around?

Lucky never even comes home to see the Webber boys, who would probably be the Spencer boys if he was actually in the picture. In addition to being Aiden’s biological dad, Lucky served as a father figure to Jake Webber (Hudson West) as well as Cameron Webber (William Lipton) once upon a time. Those days are over, so now Franco Baldwin (Roger Howarth) fills the void.

Of course, Jake gets some time with his dad, Jason Morgan (Steve Burton), too. It’s nice that the kids have people they can count on, but Aiden could use Lucky’s support right now. If General Hospital wouldn’t bring Lucky back to help his own son, they’re certainly not going to send him off to find his sister’s missing husband. Dante will need another hero to step up since Lucky’s just not a good fit.

It’s wise to disregard the bogus information out there and consider more realistic possibilities. Word has it Robert Scorpio (Tristan Rogers) may play a role in bringing Dante home, which is reasonable since he’s got WSB connections. Anna Devane (Finola Hughes) may also offer her expertise and contacts. Even Jason could be part of this plot if Sonny Corinthos (Maurice Benard) asks him to.

GH viewers hope Lucky will return one day, but perhaps the show can find a better use for him. In the meantime, General Hospital spoilers say Dante questions will indeed start swirling. A search should get underway before you know it! We’ll give you updates as other news comes in. Stay tuned to the ABC soap and don’t forget to check CDL often for the latest General Hospital spoilers, updates and news.