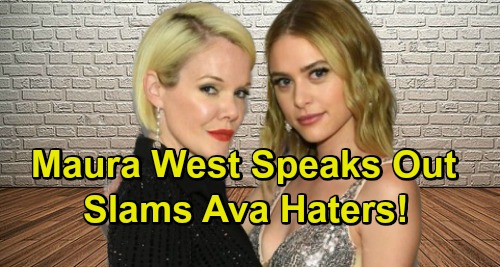 General Hospital (GH) spoilers reveal that one ABC soap star is stepping up to defend her character. In an interview with Soap Opera Digest, Maura West (Ava Jerome) opened up about Ava’s twisted love story with Ryan Chamberlain (Jon Lindstrom) and how Kiki Jerome’s (Hayley Erin) death fit into it. Since some GH fans blame Ava for her daughter’s death, West wanted to speak her mind!

West clearly doesn’t feel like Ava should be held responsible for Ryan’s actions. Ava is a victim as well, so she doesn’t deserve all the backlash over Kiki’s demise. West said, “I have heard these bits and pieces of [people saying], ‘Ava brought this on herself, she wanted Kiki dead.’ What?! That is absolutely just nonsense, preposterous – nothing true about that.”

West admitted that Ryan pulled some dark thoughts out of Ava during their therapy sessions, but she argued that thoughts aren’t actions. There’s no indication that Ava ever would’ve wanted Kiki to die. However, West also pointed out that Ryan’s intentions were good in his own mind.

“Yes, Ryan the well-intentioned serial killer. What he did for love! It’s quite beautiful, really,” West said with a laugh. If you’re wondering how West felt about this huge storyline and playing it with Jon Lindstrom, she was over the moon. West loved this exciting plot and all the mayhem it brought to Port Charles.

“A story like this is what soaps are made of, I think,” West said. She was thrilled she got to bring this story to the screen, although it was intense at times. Kiki’s death was a major blow to Ava, so that meant West had to put some real work into the aftermath. She was nervous about the high volume of heavy material, but most General Hospital fans would agree she did a wonderful job.

West even offered some fun facts about her incredible performance right after she learned Kiki was gone. When it was time for Ava to see Kiki in the body bag, Hayley Erin was no longer filming. That meant West had to work with a body double, but she quickly warmed up to her.

West asked if she could touch and kiss the young woman who stood in for Erin, which really brought a lot to the scene. “We didn’t know each other, we’d never met, but it’s amazing how little moments like that can really affect someone’s performance,” West said. It’s safe to say West has a real shot at taking home a Daytime Emmy for her outstanding work!