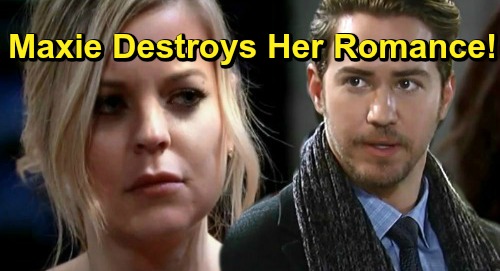 General Hospital (GH) spoilers tease that Maxie Jones’ (Kirsten Storms) plan will backfire – and it could be in more ways than one. GH viewers know Maxie wants to reunite Lulu Falconeri (Emme Rylan) with her husband, Dante Falconeri (Dominic Zamprogna). Why Maxie thinks she knows better than the specialists treating Dante is a mystery, but she’s awfully determined to bring Dante home.

Maxie’s finally moved on from Nathan West (Ryan Paevey) with the help of Peter August (Wes Ramsey), but her plot could put her new romance in jeopardy. By trying to salvage Lulu and Dante’s relationship, Maxie could end up destroying her own. Peter has repeatedly expressed concern about Maxie’s scheme. He feels if Dante were ready to come back to Port Charles, he’d be there right now.

That’s a logical conclusion, so most GH fans would agree with that. However, Maxie’s letting her love for her friends cloud her view. Her heart’s in the right place, but that won’t stop hearts from getting broken as a result of her actions. General Hospital spoilers state that this mission will have an unexpected outcome. Things will go horribly wrong and undoubtedly leave Maxie with major regrets.

It looks like Dante will refuse to see Lulu, which should leave Maxie furious and intent on talking some sense into him. She’ll do her best to make this right, but will she just make this worse all over again? Dante could easily face too much pressure and become violent. He could also bolt and disappear to who knows where. Even Lulu could feel rejected enough to just give up and file for divorce.

Bottom line, Peter is poised to be right – and that could leave him in a position to say “I told you so.” Of course, Peter may not say it exactly in those words. Sometimes a disapproving glance or cold silence can say almost as much. Whatever the case, Peter may blame Maxie for Lulu’s impending heartbreak. He cares about Lulu a great deal and certainly doesn’t want to see her get hurt.

Peter could easily step up to comfort Lulu in the aftermath. Whether it leads to love or not, Maxie could be shoved aside. Her attempt at a good deed could be the beginning of the end for “Paxie.” On the bright side, there are plenty of fish in the soap sea. Maxie could find love again with another handsome Port Charles resident, whether he lives there currently or will arrive in town later.

Regardless, the destruction of Dante and Lulu’s marriage could bring Maxie’s own romantic disaster. General Hospital spoilers say the writing’s on the wall for trouble, so Maxie and Peter had better be prepared! We’ll give you updates as other GH news comes in. Stay tuned to the ABC soap and don’t forget to check CDL often for the latest General Hospital spoilers, updates and news.