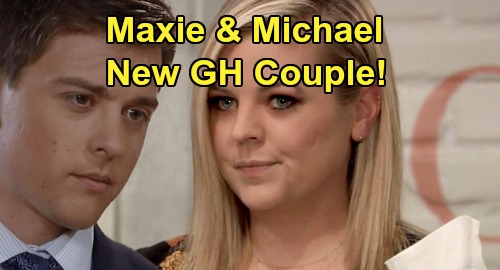 General Hospital (GH) spoilers reveal that the ABC soap has an interesting dilemma. Harrison Chase (Josh Swickard) and Willow Tait (Katelyn MacMullen) are ridiculously adorable. Their sweet romance is one of the best things GH has going for it right now. That’s great news since the show needs a hot couple we can root for, but it’s also brings some story-related problems.

GH probably didn’t count on Chase and Willow working as well as they did. They’ve been kind of a sleeper hit pairing. Willow and Chase just have a natural, cute vibe that makes them fun to watch. The logical story path would be for Michael Corinthos (Chad Duell) and Willow to get together after the baby swap is revealed. However, not everyone’s feeling Willow and Michael’s romantic chemistry.

Michael and Willow make lovely friends who have naturally connected through their struggles. Are they really worth breaking up “Chillow” for though? Who wants to see poor Chase get his heart broken? Not us! This guy is finally crazy in love, and it’d be a shame to destroy this relationship so soon.

Michael seems to work better with Sasha Gilmore (Sofia Mattsson), but their romance may be doomed due to the fake daughter secret. Where does that leave Michael? General Hospital may indeed go with Michael and Willow for a while, but what if there’s another option? It’s worth noting that Maxie Jones and Peter August (Wes Ramsey) don’t seem to have a lot of gas left in the tank.

There isn’t much going on in Peter and Maxie’s love story. Maybe it’s time to wrap things up and let Maxie move on. General Hospital fans will recall several scenes between Michael and Maxie. It seemed like the show might’ve been chem testing for a potential M&M pairing.

In interviews and on social media, both Duell and Storms expressed interest in what a romance between their characters might look like. Since Michael will get Jonah back down the road, it’d be interesting to see him get together with Maxie, who has little James. If their parents really hit it off, James and Jonah could form a brotherly bond. It could even set them up to be teen rivals in the future.

General Hospital spoilers say Maxie will grow closer to Sasha in the coming weeks. Sasha will even feel comfortable enough to open up to Maxie during the week of August 5-9. That sounds dangerous since Sasha’s keeping big secrets and could slip up. If Sasha shares something about her past, the details may not line up later. That could certainly bring suspicions for Maxie, who’s always a real buttinsky.

This would be a nice test for Maxie since she royally screwed up by butting in Dante Falconeri (Dominic Zamprogna) and Lulu Falconeri’s (Emme Rylan) issues. Maxie might decide to do nothing only to feel guilty when Michael gets hurt. Then again, she could be the one to crack the case and earn Michael’s gratitude for warning him off another con artist.

Regardless, there’s still the possibility of a Maxie and Michael romance here. Would you like to see General Hospital give it a try? We’ll give you updates as other GH news emerges. Stay tuned to the ABC soap and don’t forget to check CDL often for the latest General Hospital spoilers, updates and news.