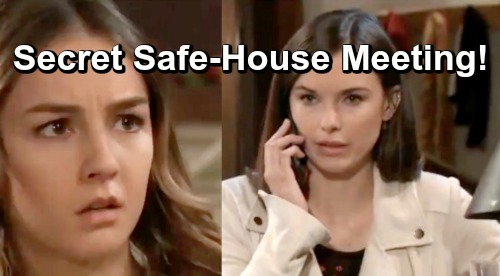 General Hospital (GH) spoilers tease that Kristina Corinthos-Davis (Lexi Ainsworth) will stand her ground. GH fans know she’s had moments when she looked close to breaking free. Michael Corinthos (Chad Duell) made a compelling argument that was full of gentle love and care. He seemed to make progress with Kristina, but she’s still unwilling to walk away from Dawn of Day.

Kristina also eavesdropped on Alexis Davis’ (Nancy Lee Grahn) chat with Dr. Neil Byrne (Joe Flanigan). She was definitely affected by Alexis’ emotional moments. It appears Kristina’s starting to understand they truly want what’s best for her. Kristina just doesn’t agree with their idea of what’s best. As a result, she’ll keep lashing out and voicing her displeasure over this whole situation.

Thankfully, there’s someone who could be quite helpful here. Michael talked to Willow Tait (Katelyn MacMullen) about speaking with Kristina and helping her see the light. Although Willow was uneasy at first, she’s decided she has to try. Willow can’t bear the thought of Shiloh Archer (Coby Ryan McLaughlin) doing to Kristina what he did to her.

General Hospital spoilers say a meeting will be arranged, so Willow will arrive at the safe house for a chat. Michael will undoubtedly introduce Willow and urge Kristina to hear her out. He’ll hope this desperate plan works since he’ll be about the last one they’ve got.

Hearing what Willow went through could mark a crucial turning point for Kristina. This is someone who knew and loved Shiloh once upon a time. Willow thought Shiloh was this wonderful leader who was full of compassion. She even considered it an honor to sleep with him before some distance gave her clarity.

Willow will also open up about how she broke free and moved on with her life. She’ll insist that Kristina can, too. It’s just a matter of shutting Shiloh out and never looking back. Kristina might bring up the pledge, which could do serious damage. Willow might admit she left a risky pledge in Shiloh’s possession as well, but sometimes you have to make some sacrifices for freedom.

General Hospital spoilers state that Dr. Neil Byrne (Joe Flanigan) will also keep working with Kristina. He’ll play a big part in Kristina cutting ties with DoD as well, but it’ll all start with Willow’s emotional side of the story. Kristina is on the verge of a breakthrough, so it should be interesting to see how Shiloh will react. You can bet he’ll fight back in some ruthless, manipulative way.

It sounds like some gripping scenes are coming up. We’ll give you updates as other GH news emerges. Stay tuned to the ABC soap and don’t forget to check CDL often for the latest General Hospital spoilers, updates and news.