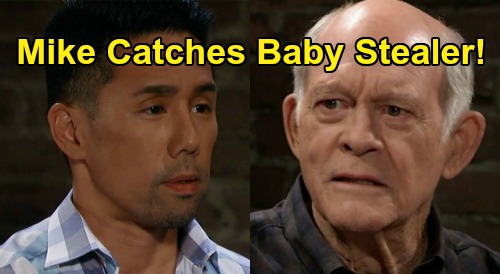 General Hospital (GH) spoilers tease that the ABC soap is setting up an interesting story connection. Brad Cooper (Parry Shen) was recently informed that Lucas Jones (Ryan Carnes) would need to be transferred to a long-term care facility. Lucas still didn’t wake up after the sedatives wore off, so now everyone just has to keep waiting and hope for the best.

Like most fans, Brad was confused when Lucas’ doctor suggested Turning Woods as the best option. After Brad pointed out it was an assisted living place, the doc noted that it was an excellent long-term care facility as well. How convenient! There’s surely a reason GH is putting Lucas in the same facility where Mike Corbin (Max Gail) lives.

If they intend to create a room set for this long-term facility, it could’ve just as easily been one at a brand-new center. The only logical explanation for Lucas being at Turning Woods is the Corinthos clan connection. It sounds like there’s going to be a baby swap story collision of some sort down the road.

After all, Sonny Corinthos (Maurice Benard) and his family already frequent Turning Woods pretty often. Carly Corinthos (Laura Wright) will have an extra reason if Lucas is there – and so will Michael Corinthos (Chad Duell). He certainly cares about Lucas and wants “Wiley Cooper-Jones’” (Erik and Theo Olson) dad to make a full recovery. Of course, Michael has no idea that HE’S “Wiley’s” true father.

That could change thanks to this strange Turning Woods scenario. There are a couple different ways General Hospital could take this story. It’s possible Mike will be wandering around and overhear Brad during a visit with Lucas. Mike is heading downhill fast and no longer has very lucid moments.

However, Mike could eavesdrop on the truth and get this idea stuck in his head. It’s easy to imagine Mike pointing Brad out to Sonny and accusing him of being a baby-stealer. Sonny would just think Mike was rambling about nonsense as usual – at least at first. Over time, the clues could slowly start to add up with the help of other family members.

It’s also possible Sonny, Michael, Carly, Josslyn Jacks (Eden McCoy) or any other visitor could overhear Brad – who’s already proven he likes to make big speeches about the baby swap by Lucas’ bedside. The point is this Turning Woods link can’t be a coincidence. General Hospital spoilers say the show’s likely going somewhere with this, so let’s hope it leads to the real story getting out!

Some hot drama’s brewing in Port Charles, so don’t miss what’s in store. We’ll give you updates as other GH news comes in. Stay tuned to the ABC soap and don’t forget to check CDL often for the latest General Hospital spoilers, updates and news.