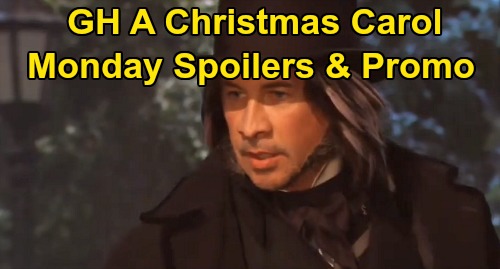 General Hospital (GH) spoilers for Monday, December 23, tease that the ABC soap will deliver a special holiday-themed episode. Monica Quartermaine (Leslie Charleson) will read A Christmas Carol by Charles Dickens to the children at GH, which will set the stage for a Hamilton Finn (Michael Easton)-centric show. It’ll be Finn’s own version of A Christmas Carol, so it sounds like a neat idea that’ll bring some surprises.

Before we get to Finn’s wild dream, he’ll apparently have some curmudgeonly moments. Robert Scorpio (Tristan Rogers) will tell Finn he’s a real Scrooge as he hangs a candy cane on his coat pocket. This will be Finn’s first Christmas with Violet Barnes (Jophielle Love), who’ll be cute as a button in Monday’s episode. Violet will join the other children for story time, but Daddy Finn could face his first parenting hiccup or two.

General Hospital spoilers say there could be some issues between Finn and Anna Devane (Finola Hughes). They’ll continue to work out how their new family fits together, so Finn could get cranky and lose his temper at one point. There may be some disagreement that leaves Finn in a foul mood before bed.

However, we should note that Tracy Quartermaine (Jane Elliot) will make her long-awaited comeback on Monday. It’ll be great to see Tracy again and find out what she’s been up to in Amsterdam. Tracy will claim she wanted to come home and hang out with the fam for the holidays. That may be true, but it’s not the only reason for Tracy’s return. She’ll definitely come back with a secret or two that’ll be revealed later.

Over with Liesl Obrecht (Kathleen Gati), she’ll declare that Christmas is a time to put aside differences and spread goodwill. It turns out Liesl will serve as sort of a spirit guide to Finn during his upcoming dream. Finn will awaken in his sleep chamber and step back in time with this spin on a Christmas classic. He’ll be the miserable miser, Ebenezer Scrooge, so expect to hear “Bah, humbug!”

It looks like Franco Baldwin (Roger Howarth) will become Bob Cratchit, so the “Friz” family will be the rest of the Cratchit clan. General Hospital spoilers hint that Aiden Webber (Jason David) will likely be Tiny Tim in this holiday tale. Other PC residents will join the fun as Scrooge Finn learns the meaning of Christmas – and how to be a good dad.

GH will go all out with ornate sets and costumes, so this is an episode you definitely won’t want to miss. It’ll be a fantastic way to celebrate Christmas in Port Charles. We’ll give you updates as other news comes in. Stay tuned to the ABC soap and don’t forget to check CDL often for the latest General Hospital spoilers, updates and news.