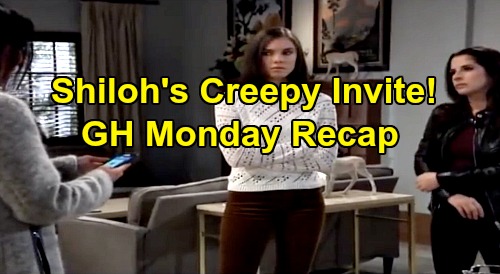 General Hospital (GH) spoilers recap for Monday, December 30, reveal that Ava Jerome (Maura West) encountered Curtis Ashford (Donnell Turner) at the Metro Court. He wondered why she was so happy after her big sale of the portrait of Helena Cassadine (Constance Towers) fell through. She said that 2020 will be her year, then stepped aside to call Nina Reeves (Cynthia Watros), who was nervous about their big plan for her upcoming wedding to Valentin Cassadine (James Patrick Stuart).

Ava then encountered Laura Collins (Genie Francis), who insisted on the truth about why Ava burned the portrait and how she could help Valentin. Ava assured Laura that she would never help Valentin, and that he will get his due. Curtis then came along and Ava mentioned Nina and Valentin’s wedding – she hoped that she’d see them both there. Afterwards, Laura and Curtis noted that Ava really wanted them to attend this wedding.

Meanwhile, at the Corinthos estate, Sonny Corinthos (Maurice Benard) got updated on his surveillance of Carly Corinthos (Laura Wright) by his associate Gio. Gio said that he had a tracker on Carly’s car and that she was currently at the pier. Jason Morgan (Steve Burton) then arrived and quickly deduced that Sonny was having Carly followed. He didn’t think this was a good idea and suggested that Sonny was doing this because he can’t control what’s going on with Mike Corbin (Max Gail).

Julian and Sam were horrified to hear that Nelle was close to Wiley, and Julian strongly suggested that Brad go get some air and meet him later at the pier. After they left, Sam and Willow got simultaneous chain texts inviting them to a memorial service for Shiloh Archer (Coby Ryan McLaughlin). They wondered who could have arranged a memorial for Shiloh, and suddenly Lorraine “Harmony” Miller (Inga Cadranel) materialized.

Harmony, who just had a job interview at Turning Woods, insisted that she didn’t arrange the memorial, and moments later she got the same chain text. Jason then arrived, and Harmony thanked him for helping her see the light where Shiloh was concerned. He quickly learned about the memorial for Shiloh and deduced that someone must be looking for revenge against them.

At the pier, Carly spoke with Jasper “Jax” Jacks (Ingo Rademacher) about his plan for Nikolas Cassadine (Marcus Coloma). Jax told her that Nikolas has disappeared, and Carly was exasperated. Jax noted that Nikolas was a changed man and was driven to destroy Valentin. Carly got emotional and Jax hugged her, which an eavesdropping Gio witnessed.

Brad then walked onto the pier, and Jax left. Julian arrived to meet Brad, so Carly left and Julian warned Brad to stay away from Nelle, and that they could get into real problems if Sonny got wind of this. Gio overheard the whole thing.

Meanwhile, at Wyndemere, Charlotte Cassadine (Scarlett Fernandez) was excited about her father’s upcoming wedding to Nina. While Charlotte went to fetch her toy horse, Valentin mused that they’d officially be a family in just a few short hours. Nina was not herself, and Valentin wondered what’s wrong. She deflected the question and tried to talk him out of a custody battle with Lulu Spencer (Emme Rylan), to no avail.

Charlotte returned and talk turned to her “imaginary” bodyguard. Charlotte noted that he was real and that her grandmother recognized a photo of him that her mother had on her phone. That alarmed Valentin, who raced off to confront Laura about the matter. Afterwards, Nina got a phone call from the hospital saying that the DNA test she had re-run was ready. She headed to the hospital and got the envelope with the results.

Back at the Metro Court, Jax and Curtis had a scheduled meeting, which Curtis requested that Laura stay for. They explained that Curtis was doing some digging for Jax on Claudette Beaulieu (Bree Williamson), and as they talked, they noticed Ava across the room who was now with Julian. Jax learned that Ava was planning to attend Nina and Valentin’s wedding, and Laura noted that perhaps she should attend as well.

Jax then called Nina to give her the heads-up that Ava was planning on crashing her wedding, and to his surprise, Nina said that Ava was the least of her worries. Meanwhile, Ava talked with Julian about Brad and Lucas Jones (Ryan Carnes), and during the course of their conversation she suggested that he find out who was named Wiley’s guardian in their wills. As she brought up the issue of codicils, Valentin walked in and overheard, his interest clearly piqued.

Back at the Corinthos estate, Gio returned and told Sonny about Carly meeting with Jax, and about what he heard from Brad and Julian. Sonny absorbed all of this, and Carly arrived, wondering what Gio was doing there. After Gio left, Sonny started interrogating Carly and she got miffed, then said that it was time she told him what was going on.