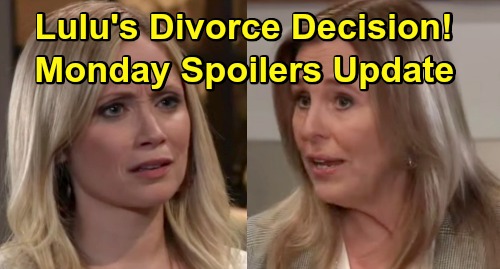 General Hospital (GH) spoilers update for Monday, July 22, tease that Lulu Falconeri (Emme Rylan) will face total devastation as she tries to process what’s just happened. As GH viewers know, she received a petition for divorce from her husband Dante Falconeri (Dominick Zamprogna), who’s currently being held by the WSB for deprogramming and treatment for PTSD.

On Monday’s episode, Laura Collins (Genie Francis) will offer motherly advice as Lulu copes with the revelation that Dante wants a divorce. At first, Lulu might think that Dante’s in no state of mind right now to make major life decisions. But she’ll also probably remember how Dante encouraged her not to wait for him when he returned home earlier this year.

Lulu will surely have mixed feelings as she gives the matter more thought. On the one hand, part of her will probably feel like their marriage is worth fighting for, and that she owes it to their son to insist that they at least attempt to make it work. But on the other hand, she might feel like it’s unfair to her to put her life on hold indefinitely, especially since Dante doesn’t want to stay married.

Lulu recently told Sonny Corinthos (Maurice Benard) that she felt broken without Dante, and it’s difficult to imagine her wanting to remain feeling this way. General Hospital spoilers indicate that Olivia Quartermaine (Lisa LoCicero) will soon reach out to Lulu, and Sonny surely will too, so she’ll have the support of her in-laws during this difficult time.

One wonders how this divorce development will affect the friendship between Lulu and Maxie West (Kirsten Storms), since Maxie’s actions in tracking down Dante are what precipitated his shooting of Peter August (Wes Ramsey) and likely prompted Dante to seek a divorce. At any rate, there could be some serious fallout between the best friends.

Meanwhile, on the new episode of General Hospital on Monday, July 22, it looks like Shiloh Archer (Coby Ryan McLaughlin) won’t be able to keep himself out of harm’s way.

He was told to back off and go away by Drew Cain (Billy Miller) after he approached Drew and Jason Morgan (Steve Burton) as they were sharing a meal at The Floating Rib. Shiloh just had to rub it in about scoring Oscar Nero Quartermaine’s (Garren Stitt) ELQ shares, and Drew was peeved.

As GH viewers know, Shiloh eventually retreated and flashed back to his time with Drew in Afghanistan. We’ll see if we’re treated to any more flashbacks on Monday’s episode, but one thing’s for sure…Drew and Shiloh will get into it again, and it will almost certainly be initiated by Shiloh. Since Shiloh has impulse-control problems, he’ll probably be unable to keep himself from needling Drew some more.

Well, Drew will end up attacking him and pinning him up against the bar. It will be a bad scene, but GH spoilers indicate that Curtis Ashford (Donnell Turner) will end up intervening in the alteration and save Drew from doing something he might regret. Unfortunately, Shiloh won’t learn his lesson, and he’ll live to agitate someone else another day.

It looks like a lot of GH drama is heating up for Monday’s episode, so stay tuned! We’ll give you updates as GH news comes in. Stick with the ABC soap and don’t forget to check CDL often for the latest General Hospital spoilers, updates, and news.