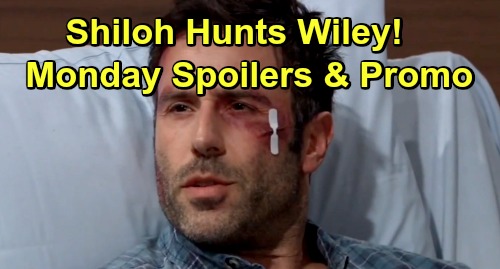 General Hospital (GH) spoilers for Monday, June 10, tease that Nina Reeves (Michelle Stafford) will try to get Ava Jerome (Maura West) on board with her vision. When Maxie Jones (Kirsten Storms) suggested Ava as their cover girl, Nina was vehemently against the idea. Her history with Ava is complicated to say the least!

However, Maxie got Nina to see the benefits for the magazine, so Nina will suck it up and pitch this to Ava. She’ll insist she wants to give Ava the opportunity to tell the world her story. Nina may point out that it’ll be the perfect “I’m back and better than ever” message. Ava can let all her haters know that Ryan Chamberlain (Jon Lindstrom) did his worst, but it wasn’t enough to keep her down.

Meanwhile, Carly Corinthos (Laura Wright) will have some advice for Lucas Jones (Ryan Carnes). She won’t think Lucas should be relying on Julian Jerome (William deVry) for favors or seeking any kind of support. When Julian realizes what Carly’s doing, he’ll ask why she’s trying to warn his son away from him. Julian is finally connecting with Lucas on some level, so he’ll be upset that Carly’s hindering that.

Other General Hospital spoilers say Diane Miller (Carolyn Hennesy) will meet with Willow Tait (Katelyn MacMullen). It looks like Willow will bring up the copies of the adoption records and how it’d be a good thing if they disappeared. Diane will offer a suspicious squint and ask what Willow’s suggesting that she do. She’ll hope Willow doesn’t expect her to destroy the proof.

Of course, that’s exactly what Willow will have in mind, but she’ll probably be willing to do it herself if need be. Julian hinted that Willow might have to, so she’s willing to do whatever it takes to protect “Wiley Cooper-Jones.” Over with Jason Morgan (Steve Burton), he’ll turn to Harrison Chase (Josh Swickard) for updates on Shiloh Archer (Coby Ryan McLaughlin). He’ll definitely hope the charges are going to stick.

General Hospital spoilers say Chase will likely still have high hopes on Monday. He feels like Shiloh’s going to prison for a long time, but maybe he needs to dial down the confidence! Shiloh’s a sneaky guy with plenty of people he can manipulate. We know he’ll be around throughout the summer, so there’s bound to be a way out of this.

That’s exactly what Kristina Corinthos-Davis (Lexi Ainsworth) will worry about in Monday’s episode. Well, she’ll worry about that and what Sonny Corinthos (Maurice Benard) will do if Shiloh walks free! Kristina will wonder if the cops have enough evidence to keep Shiloh locked up. Sonny may suggest that he thinks so and assure Kristina that she’ll be safe no matter what.

Kristina knows how her father operates, so she may fear Shiloh will be a bloody corpse eventually. General Hospital spoilers state that Kristina will deliver a desperate plea on Monday. She hates Shiloh and everything he stands for, but she’d still feel guilty for contributing to his death. Kristina may beg Sonny to stop Shiloh without resorting to murder.

At GH, Shiloh will ask someone how he’d go about tracking down a birth certificate. He’ll be eager to find his child, but that’ll be tough thanks to Julian and Sam’s plan. Even so, Shiloh is awfully determined. General Hospital spoilers say the hunt for “Wiley” will bring some tense moments and interesting twists.

It sounds like another great episode’s coming up. We’ll keep you posted as other GH news emerges. Stay tuned to the ABC soap and don’t forget to check CDL often for the latest General Hospital spoilers, updates and news.