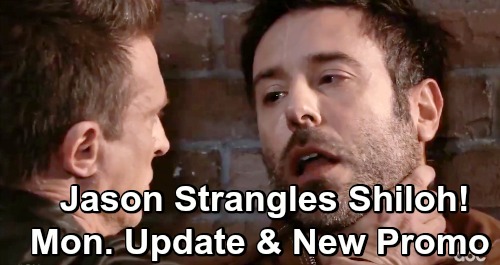 General Hospital (GH) spoilers update for Monday, March 25, and new weekly video preview tease that Dante Falconeri (Dominic Zamprogna) will face brutal nightmares. It’s clear that Dante’s latest assignment brought some negative effects. He admitted to Sonny Corinthos (Maurice Benard) that he wasn’t quite the same man anymore, and we’re about to see just how true that is.

Those scars on Dante’s back aren’t the only ones he’s got. Dante has also been scarred emotionally, so that’ll drive him to do some dangerous things in his dreams. General Hospital spoilers say Dante will repeat, “I will complete the mission.” It’ll become his mantra as he scowls in a trance. Dante will shoot and kill Lulu Falconeri (Emme Rylan) in one of his nightmares, so he should be a mess when he awakens.

Across town, Sonny will listen to Michael Corinthos’ (Chad Duell) concerns. They’ll be on the same page about Kristina Corinthos-Davis (Lexi Ainsworth) needing protection. When it you’re dealing with a guy like Shiloh Archer (Coby Ryan McLaughlin), you just can’t be too careful. Sonny and Michael will do whatever they can to make sure Shiloh doesn’t harm Kristina, but they’ll really be worried.

Over with Jason Morgan (Steve Burton), he’ll realize Shiloh’s threat is spreading. Jason peered in through the window of Kelly’s and saw a startling sight. Shiloh and Danny Morgan (T.K. Weaver) were getting a bit too close for comfort, so Jason will think they should take this outside. He’ll end up threatening Shiloh and most likely sparking a physical confrontation.

Jason is a patient man, but GH fans know he has his limits. That’s definitely the case when it comes to his kids. Jason will tell Shiloh to avoid Danny, but what happens if Shiloh says no? This cult leader may argue that Sam has a right to introduce anyone she wants into her children’s lives. Jason will probably be provoked into punching Shiloh, which may lead to his looming arrest.

At Charlie’s Pub, Alexis Davis (Nancy Lee Grahn) will push Kristina to be reasonable. They had a fight that included Molly Lansing-Davis (Haley Pullos), but Alexis will think Kristina blew it out of proportion. This concerned mom will want to make amends with Kristina and get their family back on track.

Sadly, Kristina will be so brainwashed that she won’t even consider it. She’ll view Dawn of Day as the only family she can rely on. General Hospital spoilers say Alexis will fear for her daughter’s future, so she’ll contact Jordan Ashford (Briana Nicole Henry). There’s no guarantee the police can do much of anything yet, but it doesn’t hurt to reach out.

Finally, Harrison Chase (Josh Swickard) will assure Willow Tait (Katelyn MacMullen) that he can protect her. He’ll just need to know the whole DoD story first. Willow will decide to trust Chase with the truth, so she’ll spill how her parents got her involved in the community. After a while, Willow became one of Shiloh’s pet projects and was ultimately seduced.

Once Willow was pregnant with the real Wiley Cooper-Jones, she knew she had to leave. Willow wanted to give Wiley a better life and keep him away from evil Shiloh, but now everything’s in jeopardy. Chase will do his best to convince Willow to stay in town and let him take care of her. She’ll resist for now, but something should keep Willow around soon enough.

Since Wiley died and was swapped with Jonah Corinthos, that certainly adds an interesting twist to the drama. We’ll give you updates as other GH news comes in. Stick with the ABC soap and don’t forget to check CDL often for the latest General Hospital spoilers, updates and news.