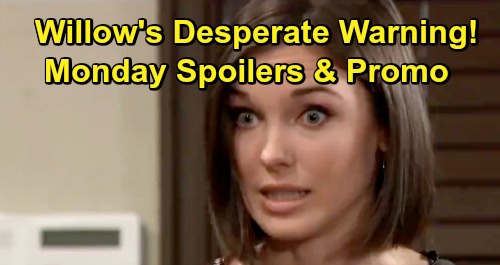 General Hospital (GH) spoilers for Monday, May 6, tease that Dr. Hamilton Finn (Michael Easton) will have Jordan Ashford’s (Briana Nicole Henry) lab test results. Unfortunately, it doesn’t look like he’ll be able to give her good news. Jordan’s kidney transplant may become more crucial than ever, so Curtis Ashford (Donnell Turner) will worry about his wife.

Curtis will also provide some updates on the Ryan Chamberlain (Jon Lindstrom) hunt. He’ll hope he’s inching closer to Ryan and possibly his accomplice, but Jordan will be his priority. At Kelly’s, Robert Scorpio (Tristan Rogers) will bump into Laura Webber (Genie Francis) and make a surprising suggestion. He’ll think they should go to the Nurses Ball together, so we’ll see if he can get Laura on board.

Over with Maxie Jones (Kirsten Storms), she’ll have some concerns about her new relationship. Maxie was thrilled to finally become an item with Peter August (Wes Ramsey), but now things are weird between them. She’ll open up to Lulu Falconeri (Emme Rylan) about her problems in Monday’s GH episode. Maxie will admit that the closer they get, the more Peter’s pulling away.

While Lulu gives Maxie advice, General Hospital spoilers say Anna Devane (Finola Hughes) will do the same for Peter. He’ll share his fears about not being able to love Maxie the way she deserves, but Anna won’t buy that for a second. The Peter she’s come to know has a huge heart, so she’ll think he should use it.

Peter will argue that Anna doesn’t know what he’s capable of, but she’ll insist Peter has the capacity to love properly. He just has to trust that part of himself and let it happen. Next, Dr. Kevin Collins (Jon Lindstrom) and Ava Jerome (Maura West) will keep up their ruse. They plan to smoke Ryan out by faking a romance, but Kevin will feel like all it’s gotten them so far is dirty looks and outrage.

Ava will contend that any attention is good attention if it gets Ryan out of hiding. She’ll just want Kevin to keep his eye on the prize. However, Lucy Coe (Lynn Herring) will definitely cause some drama for these two. She’ll hope to make Kevin her man instead, so that’ll be an obstacle for Ava and Kevin to tackle.

Other General Hospital spoilers say Willow Tait (Katelyn MacMullen) will try to get through to Kristina Corinthos-Davis (Lexi Ainsworth). She’ll tell a cautionary tale about the dangers of trusting Shiloh Archer (Coby Ryan McLaughlin). Willow will expose Shiloh for the evil liar that he is and push Kristina to truly understand. She’ll declare that she escaped and hopes Kristina can, too.

It sounds like another hot episode’s coming up. We’ll keep you posted as other GH details emerge. Stay tuned to the ABC soap and don’t forget to check CDL often for the latest General Hospital spoilers, updates and news.