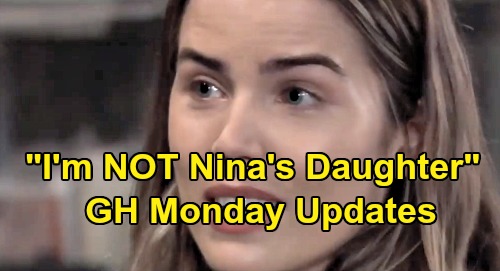 General Hospital (GH) spoilers update for Monday, September 16, tease that Sasha Gilmore (Sofia Mattsson) will go through with her plan to tell Michael Corinthos (Chad Duell) the truth. She knows this is a risky move, but she doesn’t feel right about lying to him any longer. Sasha wants a real, lasting relationship with Michael, so she doesn’t want any secrets between them.

Sasha will come clean about the fake daughter scheme and hope Michael understands. She got caught up in something that snowballed and pretty soon there was no way out – at least not a way that wouldn’t break Nina Reeves’ (Michelle Stafford) heart. Michael will be shaken by Sasha’s admission, so it’ll be interesting to see what he does next.

Over with Nina, she’ll gush to Valentin Cassadine (James Patrick Stuart) about Sasha’s job offer. Nina will think it’d be wonderful for Sasha to get this exposure as the Face of Deception. Naturally, Liesl Obrecht (Kathleen Gati) can already see the potential for disaster. Shining a spotlight on Sasha could easily shine a spotlight on her background as well, which could lead to a major revelation.

Liesl will taunt Valentin about how “cool” it’d be for Sasha to become a celebrity with avid followers – ones that are clamoring to know every detail of her life. Nina will question whether Liesl’s truly happy over Sasha’s news or not, but Liesl will insist Nina’s happiness is all that matters. However, Dr. O will definitely give Valentin something to think about. He may go to Sasha later and urge her to turn Lucy Coe (Lynn Herring) down.

General Hospital spoilers say Liesl will also speak with Brad Cooper (Parry Shen) on Monday. All this daughter talk has Liesl thinking about her own, so she’ll push Brad to help her reunite with Britt Westbourne (Kelly Thiebaud). GH viewers know Brad’s sick of Liesl’s demands, so he won’t approve of this one either.

Elsewhere, Julian Jerome (William deVry) will make a choice that’s awfully bold. Will that relate to Liesl’s murder plot or perhaps his relationship with Kim Nero (Tamara Braun)? Regardless, Kim will have another man on her mind in this exciting episode. She’ll be focused on Franco Baldwin (Roger Howarth) when he stops by and continues to comfort her over Drew Cain’s (Billy Miller) presumed death.

Franco will make it clear that he never stopped loving Kim. He feels the same now as he did the day he shipped out. Of course, Franco doesn’t have his own memories at the moment, so what he feels isn’t reality. Even so, Kim will be overwhelmed by the love that’s growing in her heart.

Harrison Chase (Josh Swickard) will drop by and remove Franco’s ankle monitor. He’ll meet up with Elizabeth Baldwin (Rebecca Herbst) soon after and let her know where Franco is. That’ll send Liz rushing over to Kim’s place, which could set up quite a shocker. Meanwhile, Franco will find a memento of Drew’s romance with Kim, which could be the CD he made for her or another intriguing souvenir.

Afterward, Kim will surrender to temptation and sleep with Franco. They should be in bed right around the time Liz shows up, so she could easily catch them in the act. Speaking of getting caught in the act, that’s exactly what just went down on The Haunted Star. Curtis Ashford (Donnell Turner) and Laura Webber (Genie Francis) walked in on something that left them completely flabbergasted.

On Monday, we’ll see that Lulu Spencer (Emme Rylan) and Dustin Phillips (Mark Lawson) are to blame. It’s the sight of them in bed together that’s thrown the artifact hunters for a loop. Laura will step outside in the hall with Curtis and declare, “Wow.” She won’t even know what to say about this bombshell, but she won’t want to dwell on it.

As for Lulu, she’ll scramble to put her clothes back on and ramble to Dustin. Lulu won’t know how she’s supposed to explain this to her mom, but how was she supposed to know Laura would show up? Furthermore, Lulu is single and interested. She had every right to hop in bed with Dustin if she wanted to – and she certainly wanted to. Even so, Lulu’s upcoming chat with Laura is sure to be an awkward one.

Laura will eventually turn her attention back to the task at hand, which is searching the yacht. She’s helping Curtis look in some Cassadine hiding spots, so she’ll open a closet and hope for the best. Within the next episode or two, Cassandra Pierce (Jessica Tuck) will emerge with a gun in her hand!

General Hospital fans won’t want to miss the hot drama ahead. We’ll give you updates as other GH details come in. Stick the ABC soap and don’t forget to check CDL often for the latest General Hospital spoilers, updates and news.