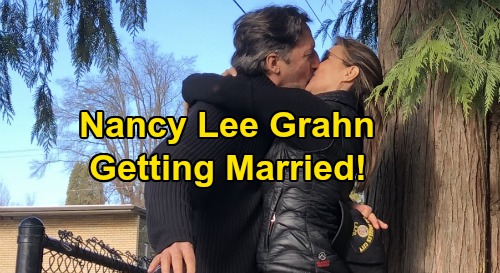 General Hospital (GH) spoilers reveal that Nancy Lee Grahn (Alexis Davis) has a reason to celebrate – she’s getting married. GH fans know Alexis’ love life has been messy and complicated over the years. She’s trying to get something going with Neil Byrne (Joe Flanigan), but the process has been slow and Julian Jerome (William deVry) is always going to be in the back of her mind.

Fortunately, Grahn’s real-life romance is going well according to a recent announcement on social media. It turns out Grahn’s engaged! On Twitter, Grahn shared the news with her fans in an adorable way. She posted a picture with her husband-to-be, which featured the happy couple kissing under a tree.

It turns out that location was a significant one since it’s where Grahn’s fiancé got his first smooch as well! “With my soon to be husband in his hometown, Eugene Oregon, right in the spot where he got his 1st kiss,” Grahn said on Twitter. She’s planting quite a smooch in the photo, so these two certainly seem content and ready to begin their new chapter together.

Naturally, Grahn’s fans were thrilled for her and made sure to say so! One General Hospital viewer gushed, “Why are you so adorable?! You’re making me believe in true love and stuff. Making me feel feelings.” Another said, “His first kiss? Looks like this will the only one he remembers!” “Awww…I needed something sweet and swoony like this today. So happy for you,” said one more fan.

It’s wonderful to get these updates from Grahn, and we’ll look forward to hearing about some upcoming wedding details. Grahn will undoubtedly make a beautiful bride! As for Alexis in Port Charles, General Hospital spoilers say her love life is about to take another hit. A shocker will shake things up for Alexis and Neil after he returns from his holiday travels.

Neil and Alexis’ budding relationship could be in jeopardy, but they’ll hold out hope that they can make it work. Where does Julian fit in all this? Is there still a chance that Alexis will head back in Julian’s direction? Time will tell, but sparks should fly between Julian and Brook Lynn Ashton (Amanda Setton) soon enough.

Of course, we all offer our congrats to Nancy Lee Grahn on her engagement! We’ll keep you posted as other GH news comes in. Stay tuned to the ABC soap and don’t forget to check CDL often for the latest General Hospital spoilers, updates and news.

With my soon to be husband in his hometown, Eugene Oregon, right in the spot where he got his 1st kiss. 💋 #CircleofLove pic.twitter.com/qQDYIb8l3i