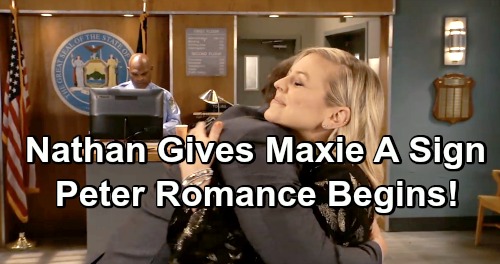 General Hospital (GH) spoilers tease that Maxie West (Kirsten Storms) will soon come to a big decision. She has been having feelings for Peter August (Wes Ramsey) for some time now, but there’s always been something in the way…her memories of her late husband Nathan (Ryan Paevey). Maxie is struggling with moving on, but she’ll soon come to terms with what she’s feeling.

In the recent past, Maxie has expressed her reservations about moving on to her mother Felicia Scorpio (Kristina Wagner), but she hasn’t really broached the subject seriously with Peter. Peter and Maxie have been dancing around the subject, as well as around the idea of starting a real relationship together, but as of yet they haven’t had a heart-to-heart about it.

But that’s all about to change. GH spoilers say that Maxie will finally discuss her reservations about moving on from Nathan with Peter. The two will have an honest and frank discussion during which Maxie will confide to Peter how scared she feels to go on with life and be with someone other than her late husband.

It’s a conversation that Maxie has probably been dreading, but the time will feel right so Maxie will go for it. She’s been worried about the timing of starting a new relationship, and she’s often wondered if it is too soon after Nathan’s death to embark on something with Peter. It look like she’ll share this will Peter, too, and get everything out in the open.

Maxie may worry about Peter’s reaction to all of this, but Peter will respond with understanding and patience. General Hospital spoilers say that he’ll tell her that he isn’t in a rush and that he’ll be there for her “whenever Nathan tells you it’s ok to let him go.” This should ease some of Maxie’s concerns.

Maxie will then pay a visit to Nathan’s gravesite, where she’ll talk to Nathan and probably express some more of her feelings about moving on. She may ask Nathan for a sign or ask for his understanding as she gets ready to move on with her life, which is undoubtedly what he would want for her.

So, will Maxie decide that the timing is now right to start a relationship with Peter? It certainly looks like that may be the case, as a GH video promo shows Maxie and Peter embracing. It would be a big step for her, and she’ll probably still be a little scared, but it looks like she’s going to go for it!

Are you excited for Maxie and Peter to get together? Stay tuned to the ABC soap and don’t forget to check CDL often for the latest General Hospital spoilers, updates, and news.