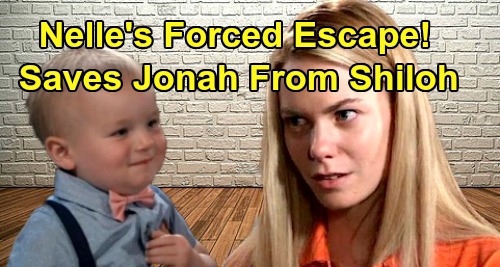 General Hospital (GH) spoilers tease that Nelle Benson (Chloe Lanier) will be feeling unsettled after her visit with Michael Corinthos (Chad Duell). As GH viewers know, Nelle seems poised to tell Michael all about Jonah being alive, but it looks like something is going to happen – perhaps a technological malfunction – that will thwart her efforts. Whatever happens, it seems clear that Nelle won’t ultimately spill the beans to Michael, at least not yet.

Chances are, there will be a lot of thoughts and worries swirling around in Nelle’s head. First and foremost, she’s worried about her son and the danger that Shiloh Archer (Coby Ryan McLaughlin) poses to him. As GH viewers know, she got an earful from Lorraine “Harmony” Miller (Inga Cadranel) about how horrible and predatory Shiloh is, and it was clear that Nelle became quite alarmed.

And while Nelle’s first reaction might have been to tell Michael about Jonah to protect the little boy, as she thinks more on the matter, she’ll probably realize that disclosing everything to Michael would have a very serious drawback. While it would protect Jonah from Shiloh, it would also almost certainly ensure that she’d never see her son ever again, because Michael and the rest of the Corinthos clan would never end up giving her access to Jonah.

General Hospital spoilers say that Nelle will probably want to come up with another plan to protect Jonah – a plan that won’t ultimately prevent her from ever seeing her son again. And this can only mean one thing…that Nelle will likely plan an escape from Pentonville. She could have it in mind to (a) kidnap Jonah and make a run for it, (b) neutralize Shiloh herself, or (c) both.

It would certainly be a risky plan, but if Nelle gets determined, watch out! She’s liable to find a way to get out of Pentonville, and let’s not forget that she has a key ally in the prison compound…Ryan Chamberlain (Jon Lindstrom). Nelle might not be able to pull off an escape on her own, but with some help and a little teamwork, she and Ryan might be able to pull it off.

GH viewers will remember that Ryan and Nelle instantly hit it off shortly after Ryan was transferred to the prison. They seemed to develop a quick respect for each other, and they’d probably make a good, devious team. Plus, if Nelle has any qualms about “neutralizing” Shiloh, Ryan probably wouldn’t have those same qualms. He might welcome the chance to escape and take care of Nelle’s problem…and enjoy doing it!

It will be interesting to see how Nelle’s plans involve, and whether she indeed gets the itch to escape and take Ryan with her. Do you think we’ll be seeing these two bust out of Pentonville together? Stay tuned to the ABC soap and don’t forget to check CDL often for the latest General Hospital spoilers, updates, and news.