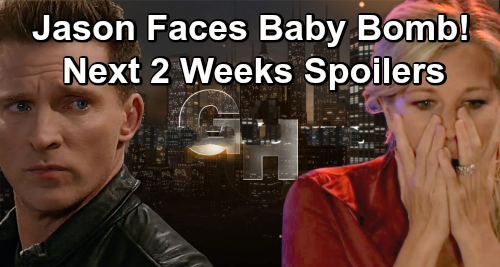 General Hospital (GH) spoilers for the next two weeks tease that some surprises are on the way. During the week of February 18-22, Laura Webber (Genie Francis) will get a big one when she stumbles across Dr. Kevin Collins (Jon Lindstrom) in Ferncliff. Unfortunately, Ryan Chamberlain (Jon Lindstrom) will stop Laura from freeing Kevin. He’ll hold Laura hostage there as well, so she’ll need a new plan.

While Kevin and Laura team up on an escape plot, Ryan will deliver a shocker to Ava Jerome (Maura West). Will Ryan decide to pop the question? Time could be running out once Laura knows Ryan is alive and behind the murders. Ryan really needs to revisit his goal of getting out of town with Ava. He might believe a proposal will convince her to leave with him.

Over with Kristina Corinthos-Davis (Lexi Ainsworth), she’ll have a lot on her mind. Kristina will end up going to lunch with Michael Corinthos (Chad Duell) and potentially letting all her worries pour out. Her jealousy issues are revving up thanks to Shiloh Archer’s (Coby Ryan McLaughlin) closeness to Sam McCall (Kelly Monaco), so she could use Michael’s guidance.

Other General Hospital spoilers say Anna Devane (Finola Hughes) will score more info on the mysterious virus. She’ll likely learn more from Dr. Arthur Cabot, who played hardball when it came to joining forces. Once Dr. Cabot gets his surgery, he’ll be a bit more willing to cooperate.

At least Liz will have Terry to talk to and rely on. During the week of February 25-March 1, Lulu Falconeri (Emme Rylan) will grow increasingly fearful. The longer she goes without hearing from Laura, he more concerned Lulu will be. General Hospital spoilers say Maxie West (Kirsten Storms) will help Lulu as they work to find out Laura’s location.

Across town, Curtis Ashford (Donnell Turner) will watch and wait. It looks like he’ll be doing that at Jordan Ashford’s (Briana Nicole Henry) bedside after an accident. Drew Cain (Billy Miller) is set to run over Jordan in his car soon, but word has it sudden blindness will be the cause of it.

General Hospital spoilers say Carly will also open up to Jason Morgan (Steve Burton). She may fill him in on her pregnancy and all the complications it’s bringing to her life. Elsewhere, Mac Scorpio (John J. York) and Felicia Scorpio (Kristina Wagner) will ponder an idea. It seems they may join in the fight to find Laura. The same goes for Lucy Coe (Lynn Herring), who’ll grill someone for a good cause.

It sounds like the next two weeks will bring some thrilling scenes. We’ll give you updates as other GH news comes in. Stay tuned to the ABC soap and don’t forget to check CDL often for the latest General Hospital spoilers, updates and news.