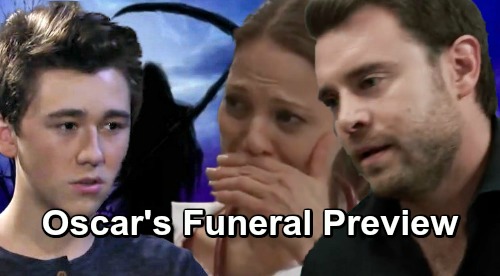 General Hospital (GH) spoilers tease that the end really is near for Oscar Nero (Garren Stitt). He’s been slowly inching his way toward death for a while now, but it’s finally starting to sink in for his family and friends. Even Oscar himself had a moment of genuine realization in Thursday’s episode. He’s dying and there’s nothing he can do about it, so he just has to say his goodbyes and prepare to depart.

Oscar will still have a little time to bond with Josslyn Jacks (Eden McCoy) and make a few more memories. Unfortunately, they’ll be somber ones for Joss. She doesn’t regret loving Oscar and wouldn’t change their short romance, but that doesn’t make this hurt any less. Josslyn will have to remember the good times after Oscar takes his final breath, and that final breath is rapidly approaching.

Oscar will be alive on April 25, but General Hospital spoilers make it clear that he’ll be fading fast. Jason Morgan (Steve Burton) will visit Oscar briefly, so they may have a discussion about Oscar’s will and any other final wishes he might have. You can bet Jason will do whatever he can to give Oscar peace before he passes away.

Oscar will also have a special request for Cameron Webber (William Lipton) that day. He may push Cam to look after Joss and give her the love he deserves once he’s gone. Dr. Kim Nero (Tamara Braun) and Drew Cain (Billy Miller) will also spend time with Oscar, but we’d say Josslyn will be the last person he speaks with. Their love story will end on a tragic note, but it’ll bring some powerful GH drama.

That drama will continue once Oscar’s funeral gets underway. Kim will be a mess as she tries to make all the arrangements. She’ll be devastated when she has to pick out a casket and ultimately bury her child. Kim can lean on Drew and Julian Jerome (William deVry), but she should be pretty inconsolable. This is every parent’s worst nightmare, so Kim will face the worst grief of her life.

Josslyn may make a speech about their love at the memorial service. She’ll undoubtedly speak with Oscar at his grave, too. Cameron will be right there to keep his promise to Oscar and support Joss through this crisis. He truly considered Oscar a friend, so it’ll be rough on him as well.