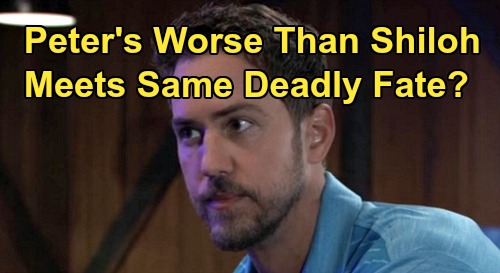 General Hospital (GH) spoilers tease that Peter August’s (Wes Ramsey) day of reckoning is drawing near. The question is: How will Peter handle his life blowing up? Peter will have a few options as his world crumbles down around him. He could sneak out of town, but that wouldn’t provide much drama.

GH writers could also have Peter accept responsibility and prove there’s still some good in him. Unfortunately, that wouldn’t provide a very dramatic outcome either. Since they’ve sank Peter this low, they should see it through to the end. Perhaps Peter himself gave viewers a clue during his dream confession to Maxie Jones (Kirsten Storms).

During that nightmare, Peter insisted he was worse that Shiloh Archer (Coby Ryan McLaughlin). Is that true? Peter may not have a string of women he’s violated, but he’s been willing to commit multiple murders and mess with people’s minds. He’s arguably a wolf in sheep’s clothing, but a wolf is still a wolf.

Peter may be in a dangerous frame of mind once he has nothing left to lose. He’ll continue working every angle he can to keep the truth from coming out, but there’s no stopping this freight train. General Hospital spoilers say Peter will face a shocking exposure. All his misdeeds should come to light, so what will his reaction be? Could Maxie be in grave danger once she turns against him?

Peter could easily decide if he can’t have Maxie, no one can. That’s especially true if she’s adamant that there’s absolutely no hope for their future. Peter could give himself over fully to the dark side and forget about this notion of trying to be a better man. He’s only been masquerading as a better man anyway.

Jason Morgan (Steve Burton), Sam McCall (Kelly Monaco) and Damian Spinelli (Bradford Anderson) may be the ones to reveal Peter’s evil transgressions, but who will save Maxie from the chaos ahead? Maybe it’ll be Robert Scorpio (Tristan Rogers) and even Mac Scorpio’s (John J. York) shot at a shining moment. Anna Devane (Finola Hughes) could get in on this rescue as well and perhaps accept that Peter’s become a monster.

General Hospital spoilers say Peter could be destined for a deadly fate – just like the villain he claims to be worse than. Is Peter really worse than Shiloh? Will he prove it as his world spirals out of control? We’ll give you updates as other GH news comes in. Stay tuned to the ABC soap and don’t forget to check CDL often for the latest General Hospital spoilers, updates and news.