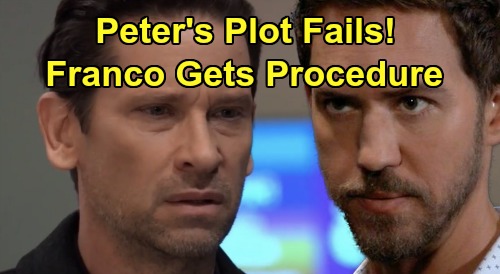 General Hospital (GH) spoilers tease that Elizabeth Baldwin (Rebecca Herbst) has one final hurdle to getting her husband back – and his name’s Peter August (Wes Ramsey)! Once Peter learns “Drew Cain” aka Franco Baldwin (Roger Howarth) is moving forward with the memory reversal procedure, he’ll go into panic mode. Peter’s on the verge of getting his happily ever after with Maxie Jones (Kirsten Storms), so he’s not about to let “Drew” blow this for him.

GH fans know Peter was responsible for “Drew’s” plane crash and presumed death. Now he’ll plan to target the fake Drew as well. Peter’s the kind of guy who does whatever it takes to get what he wants. If “Drew” has to die as well, that’s certainly something Peter could accept.

However, Peter’s main goal will be preventing this procedure by any means necessary. He’ll make some drastic moves in an attempt to stop Andre Maddox (Anthony Montgomery) from performing it, which puts Andre in danger, too. The good news is it looks like Peter’s desperate sabotage efforts will be unsuccessful. The bad news is there are no guarantees that “Drew” will be Franco again or even wake up.

General Hospital spoilers say Liz and Cameron Webber (William Lipton) will await word on “Drew’s” dangerous procedure. Cameron will be especially worried since he blames himself on some level. Of course, it’s not Cam’s fault Shiloh Archer (Coby Ryan McLaughlin) kidnapped him and tried to force him to have “Drew’s” memories implanted – just like it’s not Cam’s fault that Franco took his place.

Even so, Cameron will fear that “Drew” will remain “Drew” or could be stuck in a vegetative state. That would certainly pile on even more guilt. Cameron will also fret over his brothers, Jake Webber (Hudson West) and Aiden Webber (Jason David). They would be devastated if Franco never woke up, so there’ll be a lot at stake. If Aiden and Jake are told what’s going on beforehand, that’ll make all this even more suspenseful.

However, General Hospital spoilers say the procedure will be completed eventually, which means Liz and her boys will learn the outcome. Will Franco finally be Franco again? Time will tell, but GH buzz suggests Franco will be back to his old self by Christmas. Even if there’s a bit of a delay at first, there should be a flood soon after. It don’t be long until Franco reunites with the “Friz” family and gives them the ultimately holiday gift.

Cameron’s overwhelming guilt will be lifted, and he can let Franco know how much he really means to him. He’ll undoubtedly offer his gratitude and enjoy seeing Liz happy for the first time in months. General Hospital spoilers say some great scenes are coming down the road. We’ll give you updates as other GH details emerge. Stay tuned to the ABC soap and don’t forget to check CDL often for the latest General Hospital spoilers, updates and news.