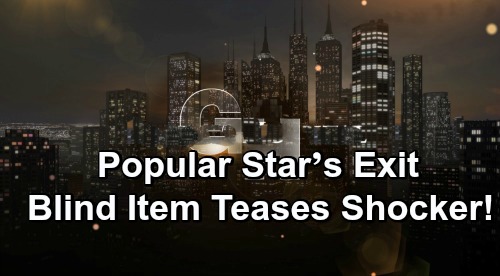 General Hospital (GH) spoilers tease that a recent blind item points to a big departure. According to Soap Opera Digest, one of the four daytime dramas has a surprising exit ahead. A popular star is set to leave his soap home once again, so let’s consider what that info might mean for GH.

Since this actor is leaving again, that means he’s left before and returned. That narrows things down a bit. For all the “JaSam” fans out there, you shouldn’t worry about Steve Burton (Jason Morgan). He signed a three-year contract when he returned to General Hospital, so we should get lots of Jason through at least 2020.

However, there are other popular stars that might be departure contenders. Robert Scorpio (Tristan Rogers) might fit the bill. Many General Hospital fans love him, especially longtime viewers who have been tuning in faithfully for years. Even so, Robert could end up leaving town again pretty soon. He doesn’t tend to stick around indefinitely, and his recent arc seems to have fizzled.

Down the road, there’s a chance Robert will reunite with Anna Devane (Finola Hughes) after all. Hayden Barnes (Rebecca Budig) is headed back to GH with Dr. Hamilton Finn’s (Michael Easton) child, so that could certainly shake things up for “Fanna.” They’re on cloud nine after their recent engagement, but their bubble could burst once Hayden reappears and Finn’s old feelings potentially return.

In that case, Robert might be brought back in the picture, but there’s not going to be much for him to do in the meantime. Perhaps Robert will exit soon until he’s needed again. Of course, Finn is another actor who’s departed General Hospital before. Could he be poised for another exit? If we were going to write Finn out, we’d definitely use Hayden and the kid back as part of his departure story.

It’s possible Finn will reunite with Hayden and start a family with their son or daughter. They could all ride off into the sunset together. Even if it doesn’t happen now, that may be an exit route GH will save for when they need it. Fickle hearts can always come back together on soaps.

It should be interesting to see if this popular actor leaves GH or if this blind item relates to another daytime drama. General Hospital spoilers say the action will keep heating up in Port Charles, so stay tuned. We’ll give you updates as other GH news comes in. Stick with the ABC soap and don’t forget to check CDL often for the latest General Hospital spoilers, updates and news.