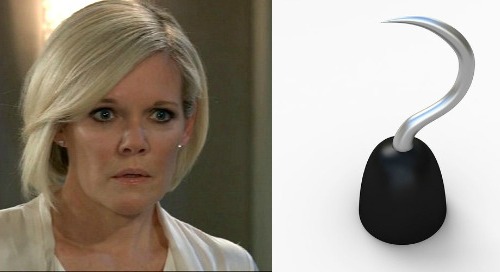 General Hospital (GH) spoilers tease that Ryan Chamberlain (Jon Lindstrom) is seemingly on his way back to Port Charles as Captain Hook. Only an insane person would cut off his or her hand for any reason, but that’s exactly what Ryan is. Ava Jerome (Maura West) noted that was just the kind of move psychotic Ryan would make. His unhealthy obsession with Ava is likely the reason for all this drama.

Jason Morgan (Steve Burton) shot Ryan before he fell off the bridge over the Niagara River. However, Ryan’s arm would probably be the part amputated from that injury. If Ryan’s hand required amputation from the gunshot, his arm would have as well.

Jason caught Ava and pulled her back to safety, but what happened to Ryan? Could Ryan’s hand have gotten hung on the way down? It’s possible Ryan cut it off to get out of a tight spot. If he was hanging in mid-air, Ryan clearly had the skills to cut off his hand to free himself.

Then again, General Hospital spoilers say Ryan may have cut off his hand as a gesture of love for Ava. He credits Ava for his killing spree, especially for Kiki Jerome’s (Haley Erin) death and Lulu Falconeri’s (Emme Rylan) attack. Ryan possibly sees his hand as a way to show Ava he will do anything to get back to her.

GH fans know Ryan is as obsessed with Ava as he was Felicia Jones (Kristina Wagner). His sick mind could justify this as reassurance of his love for Ava. Little does Ryan know that Ava hates him and only wants him dead!

It’s also possible Ryan left that hand behind as a message to his surviving victims. It could be an omen of what’s ahead for several vulnerable PC residents. Is Ryan suggesting that he’s still coming for them?

Carly Corinthos (Laura Wright) survived Ryan’s attack and so did Lulu Falconeri (Emme Rylan). Felicia Jones Scorpio (Kristina Wagner) also beat the odds and avoided an early death. Ryan tried to take Ava off the bridge with him, but she became a survivor, too.

Ryan may believe he can only be happy in death with Ava, his most desired victim. She’s convinced Ryan is coming back and believes cutting off his right hand proves it. General Hospital spoilers say Ava will remain determined to protect herself and take Ryan down, but will everything go according to plan?

Ryan has a host of victims fearing his return, but many people also want to take him down – especially vengeful Ava. Will Ava end Ryan’s reign of terror once and for all? Will he escape and live to kill another day or die a death as gruesome as Kiki’s? We’ll give you updates as other GH news comes in. Stick with the ABC soap and don’t forget to check CDL often for the latest General Hospital spoilers, updates and news.