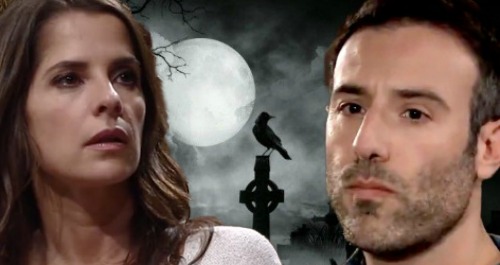 General Hospital (GH) spoilers tease that Sam McCall (Kelly Monaco) could be in grave danger – and judging by the look on her face, she knows it. The guard revealed that Sam’s cellmate would be joining her soon. She’s been stuck in solitary, but the guard insisted they’d have plenty of time to get to know each other. Just before the guard sauntered off, she declared that “every day is a new dawn.”

That’s Dawn of Day’s mantra and something a devoted Shiloh Archer (Coby Ryan McLaughlin) follower would repeat. The fact that this guard and potentially others are DOD supporters is incredibly troubling. Shiloh’s followers seem to be just about everywhere, and they could be looking for revenge. Their fearless leader was killed by Sam, so she’s definitely got a target on her back.

The guard had to know Sam would recognize that “every day is a new dawn” phrase. She sent a clear message – perhaps one that was meant to instill growing fear. Sam’s afraid and she should be! She’s obviously not safe at Pentonville with Dawnies lurking all over the place.

Jason Morgan (Steve Burton) was already concerned about Sam’s safety, so he’ll be even more concerned once he gets updates. He’ll undoubtedly visit Sam soon, so she may admit the guard’s part of DOD and could have a plot cooking.

There could be an organized DOD effort to have Sam killed. This guard may have others backing her up, including inmates who happened to read Shiloh’s book. Pentonville guards aren’t known for protecting their inmates anyway, so GH spoilers say Jason will certainly want to do something about this.

Will Sam be hurt before Jason can get her out? Will Jason have to stage a prison break? Those are some interesting possibilities to consider as this General Hospital storyline moves along. Sam doesn’t have the option of Jason sending himself to Pentonville to save her. He did that for Michael Corinthos (Chad Duell), but Sam’s on her own here. Her life is at risk, so Jason will have to figure something out soon.

Of course, Sam could get some help from an ally or two on the inside. Harmony Miller (Inga Cadranel) might be one if they cross paths. There’s also a possibility Cassandra Pierce (Jessica Tuck) will be Sam’s cellmate, so that’d be intriguing. They wouldn’t be friends if they were walking around Port Charles, but strange friendships – or least partnerships – can be formed behind bars.

Even so, the threat here is very real. Shiloh’s followers were obsessed with him when he was alive. They’re bound to feel hopeless and furious now that he’s dead. In their minds, the world’s lost a wonderful man who did so much good in the world. The truth is Shiloh was a disgusting dirtbag, but that won’t stop this guard and other DOD helpers from going after Sam.