General Hospital Spoilers: Sasha and Michael’s Hot Hookup – Was It Real or Just a Steamy Fantasy? 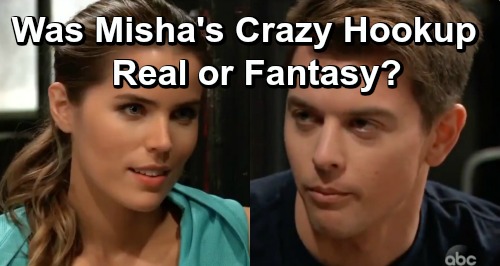 General Hospital (GH) spoilers reveal that Sasha Gilmore (Sofia Mattsson) and Michael Corinthos (Chad Duell) seemed to move from a gym workout to a sex workout in the blink of an eye. Are Sasha and Michael becoming friends with benefits way too fast or is someone fantasizing?

Michael is typically quite the gentleman, so it was a bit jarring to see him take this step so fast. He helped Sasha in the gym when her hand needed massaging, but GH quickly moved them to the bedroom. It was out of character for Michael to move so fast, but it’s worth mentioning that he seemingly hasn’t had sex in ages. There’s always a chance he just needed it that bad!

Still, most couples prefer to get hot and sweaty during the sex, not during a workout beforehand. And what happened to a little small talk and romance? This wasn’t Michael’s style and may not be Sasha’s either. Yes, she came on to Dr. Griffin Munro (Matt Cohen), but she didn’t sleep with him. We also haven’t seen Sasha attracted to anyone else until now, so it’s not like she’s some wild sex addict.

Could Michael really be this irresistible to Sasha or is there more to this story than we know? General Hospital fans want some love in the afternoon, but we don’t necessarily want Michael subjected to another lying, money-hungry woman. Sasha has a softer side, but she’s keeping big secrets and clearly likes to make a quick buck.

As fast as this scene transpired, GH viewers have to wonder if Michael and Sasha actually had sex or if one of them was having a steamy fantasy. Sasha could’ve gotten turned on by Michael’s massage and imagined what it would’ve been like to indulge in an afternoon fling with him. Then again, Michael might’ve been the one imagining unbridled sex since he’s been thirsty for so long.

Whether this scene was real or imaginary, many GH fans agree that Michael and Sasha have chemistry. They’d make a hot couple, but what happens when the truth about Sasha’s fake daughter con comes out? General Hospital spoilers say Michael may feel duped once again, so his unlucky-in-love streak could continue.

Are you rooting for Michael to find something real that truly lasts? We’ll give you updates as other GH news comes in. Stay tuned to the ABC soap and don’t forget to check CDL often for the latest General Hospital spoilers, updates and news.