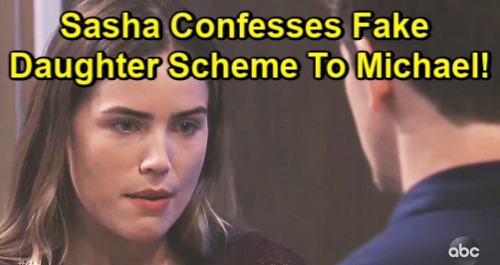 General Hospital (GH) spoilers tease that Sasha Gilmore (Sofia Mattsson) will have a confession to make. GH fans know Sasha promised Michael Corinthos (Chad Duell) something as she fought for her life. Things were pretty dire for a while, so Sasha was battling extreme guilt and facing Michael’s suspicions. Although Michael hasn’t been pushy about Sasha’s past, he can tell she’s keeping a few secrets.

Sasha vowed to tell Michael everything once she recovered – even if he wouldn’t like it. That left Michael to consider what Sasha might spill. After dealing with all Nelle Benson’s (Chloe Lanier) drama, Michael is understandably concerned. However, he can tell Sasha isn’t a sociopath like Nelle. Michael’s wondering how bad this confession could possibly be since Sasha’s so kindhearted.

Will Sasha keep her word and come clean to Michael? General Hospital spoilers suggest Sasha will at least plan to. It looks like she’ll have every intention of divulging the fake daughter shocker to Michael this week. It’s just a matter of whether Sasha will actually go through with it.

Sasha Gilmore Is Trapped In The Mess She Signed Up For

GH’s weekly preview video shows a perplexed Michael listening to Sasha. He seems concerned about what Sasha’s got on her mind. Sasha declares that it’s time for Michael to hear the truth about who she really is. It’ll definitely be a dramatic moment, so expect General Hospital to play it up right!

If history is any indication, Sasha may back out at the last second. GH characters don’t make admissions very often unless they’re forced into them. It’d be unusual for Sasha to just rat herself out, especially when the confession could cost her Michael. There’s a lot at stake here since Michael could tell Nina Reeves (Cynthia Watros) and break her heart, too.

Even so, Sasha’s guilt is really taking a toll. The harder Sasha falls for Michael, the tougher it becomes to lie to him. Sasha hates all this deception, but she’s trapped in the mess she signed on for. She never expected to love Nina so much or to find this great relationship with Michael.

Sasha initially just wanted to make a quick buck as part of Valentin Cassadine’s (James Patrick Stuart) plot, but she’s now building a life in Port Charles. Can Sasha stand living that life while deceiving Michael? It’d be refreshing to see a GH character actually confess for once. It’d also put Michael in tricky position, which would be interesting to watch.

Michael would have to decide if this lie is something he could get past. He would decide the fate of his future with Sasha. Michael would also be left to ponder if Sasha’s right about keeping Nina in the dark. At this point, is lying to Nina the kindest thing to do? This would be a great crisis for Michael to tackle, particularly because he’s being deceived about his own child.

Next week, General Hospital spoilers say Willow Tait (Katelyn MacMullen) will spot Michael looking upset. She’ll comfort him through some difficult moments, so Michael could end up dealing with the aftermath of Sasha’s confession. Of course, that could also be about something else, but we can’t rule out the idea that Sasha will indeed spill her story.

Do you hope Sasha confesses to Michael? Would Michael tell Nina or keep quiet to protect her? We’ll give you updates as other GH news comes in. Stay tuned to the ABC soap and don’t forget to check CDL often for the latest General Hospital spoilers, updates and news.