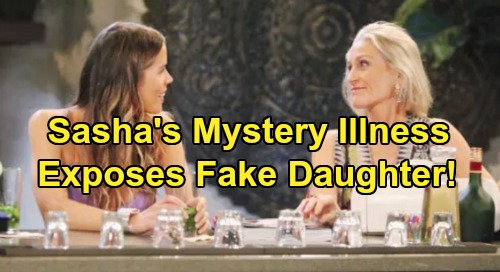 General Hospital (GH) spoilers tease that Sasha Gilmore (Sofia Mattsson) may be in some serious trouble very soon, and in more ways than one. As GH viewers know, she’s been awfully confident lately. She seems to have everything going for her, with a great new life in Port Charles, a relationship with her “mom” Nina Reeves (Cynthia Watros), and a great boyfriend who just whisked her away to Puerto Rico for vacation.

Sasha doesn’t seem to be worried at all about her fake daughter scam with Valentin Cassadine (James Patrick Stuart) being detected. She’s so confident in everything working out that she’s planning on staying in Port Charles and getting even closer to Nina and Michael Corinthos (Chad Duell).

But it looks like trouble is brewing. As GH viewers know, Sasha recently ate a grapefruit that had been injected with some mystery substance by Cassandra Pierce (Jessica Tuck). Cassandra’s got some plan up her sleeve, and it looks like Sasha may end up having been poisoned or injected with some mystery virus. Whatever it ends up being, General Hospital spoilers say that it will cause some major health problems in pretty short order.

As it turns out, Sasha is someone who really can’t afford to have a major medical crisis, given the kind of secret she’s keeping. She’s supposed to be Nina’s biological daughter, and so if she gets really sick and genetic testing is in order, or even if she needs something as simple as a blood transfusion, she risks her secret being blown wide open.

After all, her genetic profile and even her blood type should be consistent with someone who’s Nina’s daughter…and that could pose a huge problem, given that Sasha’s completely unrelated to Nina. If Sasha’s got some sort of mystery disease that needs to be treated by someone like Dr. Hamilton Finn (Michael Easton), then Finn’s probably going to have to delve deep into Sasha’s genetic background.

And that will spell trouble for Sasha and Valentin. Finn’s a pretty perceptive guy as well as being an astute physician, and he may figure out pretty quickly that Sasha and Valentin have some sort of secret, since they’ll no doubt have lots of hushed conversations as Sasha’s dealing with her medical issue. And if Sasha ends up needing donor blood, bone marrow from a family member, or the like, then panic is going to set in for her and Valentin.

Could all of this ultimately lead to the secret about Sasha not really being Nina’s daughter coming out? It certainly seems likely, especially if Finn figures out that Sasha isn’t really Nina’s daughter.

Of course, Finn won’t be able to divulge information about a patient without permission, so it’s not like he can just run to Nina and tell her the truth, but it’s hard to imagine Sasha and Valentin being able to contain their secret if Sasha’s life depends on the secret coming out!

It will be interesting to see how this all plays out, and exactly what happens to Sasha as a result of her drugging by Cassandra, but GH spoilers say she’s headed for a crisis that will threaten all the great things she’s got going in her life right now. Do you think that her good life will be in jeopardy soon? Stay tuned to the ABC soap and don’t forget to check CDL often for the latest General Hospital spoilers, updates, and news.