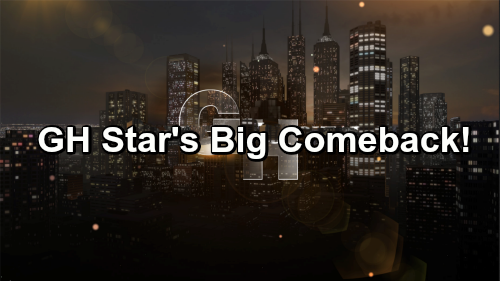 General Hospital (GH) spoilers tease that one ABC soap star would like to make a comeback. GH fans will remember Scott Reeves for his portrayal of Steve Webber. He appeared on the show from 2009-2013, but Reeves wouldn’t mind returning and shaking up Port Charles a bit.

Steve landed behind bars before his exit, but Reeves thinks that’s a plus. It could provide some intriguing material if Steve made his way back to PC. In an interview with ABC Soaps in Depth, Reeves talked about the possibility of a General Hospital return. “It would be interesting to see how prison affected Steve,” Reeves said. There would certainly be several routes GH could take with him.

Of course, Reeves suggested that it’d be the perfect time to cause drama for Olivia Quartermaine (Lisa LoCicero). She’s happily married to Ned Quartermaine (Wally Kurth), but blissful marriages are tough to maintain on soaps. Sooner or later, trouble tends to strike. Perhaps trouble could come in the form of Olivia’s former flame! Steve could reenter the picture and make quite a mess of her romance.

“I would love nothing more than to go stir things up in Olivia’s perfect, stable life,” Reeves said. He’s clearly on board with a General Hospital comeback, so it seems the ball’s in GH’s court. They just need to contact Reeves and work out the details if they’re interested. It might be a good idea to work Steve back into the mix once some of the current storylines wind down.

GH viewers always love when a face from the past shows up. The show’s history is important, so it’s nice when they revisit and let viewers take a trip down memory lane. Of course, using a character from the past doesn’t mean that character can’t grow and change. It’s been long enough that they could pretty much take Steve in any direction they wanted to go in.

Would you like to see Steve Webber back on canvas? What kind of storyline would you like for Steve? General Hospital spoilers say some excitement’s brewing in Port Charles no matter what, so stay tuned. We’ll give you updates as other GH news comes in. Stick with the ABC soap and don’t forget to check CDL often for the latest General Hospital spoilers, updates and news.