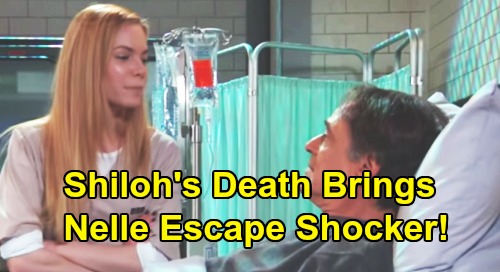 General Hospital (GH) spoilers tease that Nelle Benson (Chloe Lanier) will soon get some shocking news. As GH viewers know, she had been getting to know Shiloh Archer (Coby Ryan McLaughlin) ever since he was taken to Pentonville.

Nelle and Shiloh had several interactions with each other before Shiloh met his end, and Nelle let him know that the two of them could make a good team, since they each had something against the Quartermaines.

Of course, since this is Nelle that we’re talking about, she clearly had some ulterior motives where Shiloh was concerned. She made veiled statements to him about wanting to reunite him with his son Wiley Cooper-Jones (Theo and Eric Olson), when she knew good and well that Wiley was really her own son, Jonah Corinthos. It looked like Nelle was hoping that Shiloh could help her plot an escape, although she never came right out and said so.

What Angle Will Nelle Benson Play Now That Shiloh Archer Is Dead?

It’s pretty clear that Nelle someday wants to be reunited with her little boy. Plus, reliable GH spoilers indicate that Nelle may indeed make her escape from Pentonville down the line. But now that Shiloh is dead and gone, what angle will Nelle play to make her big escape? She’ll certainly need help, and she probably won’t be able to get the job done with her roommate, Lorraine “Harmony” Miller (Inga Cadranel).

Well, we can’t forget that Nelle has another ally in Pentonville, and that’s Ryan Chamberlain (Jon Lindstrom). She and Ryan made fast friends when Ryan was first admitted to the prison through the infirmary. Nelle happened to be working in the infirmary shortly after Ryan woke up and realized that he had been tricked into donating his kidney to Jordan Ashford (Briana Nicole Henry).

Of course, Ryan was incensed that he was minus a kidney, and Nelle could certainly relate to that sentiment. The two bonded and seem to share a lasting connection. So, will Nelle seek out Ryan to help her make her escape from the prison?

Ryan Chamberlain Has Some Unfinished Business With Ava Jerome

We think it’s likely that we’ll see more of the blossoming friendship between Nelle and Ryan down the line, and if there’s indeed an escape from Pentonville, it will likely be the two of them who mastermind the plan.

Of course, while Nelle may want to escape in order to see (or even abduct) her son, Ryan will have different motivations. He may feel that he has unfinished business with Ava Jerome (Maura West). Given that he’s been writing to her from behind bars, he’s clearly still fixated on her, and he might jump at the chance to potentially see her again.

Do you think we’ll see Nelle and Ryan escape from Pentonville? Stay tuned to the ABC soap and don’t forget to check CDL often for the latest General Hospital spoilers, updates, and news.