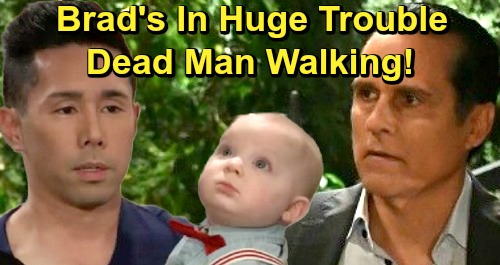 General Hospital (GH) spoilers tease that Brad Cooper’s (Parry Shen) problems are about to get far worse. Drunk Liesl Obrecht (Kathleen Gati) just dropped a huge hint to Franco Baldwin (Roger Howarth) at the wedding reception. She mentioned “Wiley Cooper-Jones’” (Theo and Erik Olson) real father, so that could be a clue that comes into play for Franco later.

We’ve also got Ava Jerome’s (Maura West) psychic to stir up trouble. Sibley Gamble’s (Veronica Cartwright) been hinting at things that several Port Charles residents would rather her keep under wraps. Even Shiloh Archer (Coby Ryan McLaughlin) himself is on the verge of proving that “Wiley” isn’t really his son.

In other words, the walls are closing in on stressed-to-the-max Brad. Will he come clean before a DNA test shows “Wiley” isn’t the real deal? If Lucas Jones (Ryan Carnes) gets one too many clues, Brad may have to divulge at least part of the story – the part where he switched his dead baby for another woman’s healthy one. It’s the part about Nelle Benson (Chloe Lanier) that Brad might try to hang onto.

GH fans know Brad involved Julian Jerome (William deVry) unfairly in this baby switch debacle. Brad neglected to spill all the beans! If Julian had known Brad swapped Wiley for Jonah Corinthos, he might’ve insisted on the truth coming out. Instead, Brad put Julian at odds with his archenemy once again. Sonny Corinthos (Maurice Benard) is sure to unleash his wrath once the whole story unravels.

Brad has kept Michael Corinthos’ (Chad Duell) child away from him willingly for almost a year now. You can bet Sonny and Michael will be out for blood once all this blows up. General Hospital spoilers say Julian will get caught in the crossfire, but it’s Brad who’ll pay the steepest price. He’ll undoubtedly lose “Wiley” and Lucas, but will he also lose his life?

Brad could easily wind up in the pine barrens for his deception and appalling crimes. Everyone’s expecting Shiloh to face a gruesome end, but what about Brad? Could Sonny move forward with deadly revenge? He’s been a bit too soft lately with all this expectant father stuff. That could actually make Sonny even more enraged as he considers how he’d feel if that baby were ripped away.

General Hospital spoilers say Sonny may prove he’s a force to be reckoned with. Could Brad be killed off after the baby swap comes to light? Regardless, Brad will face major consequences down the road. We’ll give you updates as other GH news comes in. Stay tuned to the ABC soap and don’t forget to check CDL often for the latest General Hospital spoilers, updates and news.