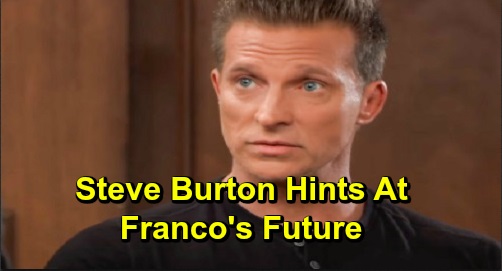 General Hospital (GH) spoilers reveal that many fans are ready to see Franco Baldwin (Roger Howarth) recover his memories and get back to his old self. Elizabeth Baldwin (Rebecca Herbst) and the boys are heartbroken over this whole “Drew Cain” situation. They’re desperate for a “Friz” family reunion, but the judge’s decision has brought a major setback.

Of course, there’s certainly hope for things to turn around. General Hospital spoilers suggest Franco may ultimately have the procedure done anyway. He’s not legally obligated to now that Liz’s rights have been terminated, but it’s still the right thing to do. Franco will indeed become Franco again down the road. It’s just a matter of whether it’ll be through the procedure or the power of love!

However, there’s one GH actor who likes the idea of Franco remaining “Drew.” Much like the character he portrays, Steve Burton (Jason Morgan) can see the benefits of “Drew” sticking with his current identity. In an interview with Soap Opera Digest, Burton talked about the complex issue and explained a bit more about his perspective.

“I think it would be so interesting if he stayed Drew,” Burton admitted. “People have this perception of what Franco is – and he’ll never shed what Franco was.” Burton pointed out that this was the first time Jason was able to look at Franco and have some compassion for him. Since Franco doesn’t believe he’s Franco or have any of his memories, Jason’s willing to extend just a bit of grace to his enemy.

Burton added that he’s had some intriguing discussions about this with his costar, Roger Howarth. They seem to agree there’s still some untapped potential here. “I talked to Roger about it; I think there’s something interesting to explore,” Burton said.

Burton noted that Jason is never going to be a Franco fan, so Jason doesn’t mind if that part of him “dies.” Even so, Jason can understand that this is rough for Liz and her kids. He feels bad on some level despite his intense hatred for Franco.