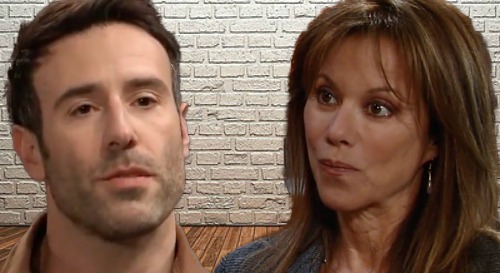 General Hospital (GH) spoilers tease that Shiloh Archer (Coby Ryan McLaughlin) is in more danger than ever. Of course, he doesn’t see it like that. Shiloh doesn’t seem too fearful when it comes to Jason Morgan (Steve Burton) and Sonny Corinthos (Maurice Benard).

You’d think he would be considering their reputations and the fact that Jason just kicked his butt at the tower, but Shiloh’s too smug to accept that he’s in trouble.

Shiloh’s list of enemies is growing, but he’s focusing on Sonny and Jason as his main threats. He even pointed the cops in their direction in case of a deadly outcome. If Shiloh gets murdered or ends up in an “accident,” he made it clear Jason should be the top suspect – which could naturally tie back to Sonny.

However, that seems too easy if GH is gearing up for a murder mystery at the end of all this. Even if they skip the mystery and just go for the death, it’ll be awfully predictable if Jason pulls the trigger. Fortunately, General Hospital is seemingly laying the groundwork for other characters to potentially do the deed. The one we want to focus on right now is Alexis Davis (Nancy Lee Grahn).

Alexis is currently obsessing over Kristina Corinthos-Davis’ (Lexi Ainsworth) pledge, which she doesn’t know the contents of. GH viewers, on the other hand, know exactly what the topic was. Kristina’s trust offering was all about Alexis murdering Kiefer Bauer (Christian Alexander). That pledge has been destroyed, but perhaps Alexis could find herself facing other charges – namely, Shiloh’s!

Alexis has certainly been exploring her troubling roots and digging deep into the danger she craves. In her sessions with Dr. Neil Byrne (Joe Flanigan), Alexis admitted that part of her still wants bad boy Julian Jerome (William deVry) and not this nice, reformed one. GH may be hinting at Alexis’ dark side for a good reason.

Another clue might be contained in some General Hospital spoilers for June 21. A tense confrontation is on the way for Shiloh and Alexis. After Shiloh pushes Alexis’ buttons, she’ll be left fuming.

Alexis obviously isn’t going to kill Shiloh on the spot, but this could set up her snapping down the road. If Shiloh goes after Kristina or even Sam McCall (Kelly Monaco) somehow, Alexis’ Mama bear instincts may kick in. She could kill Shiloh if he drives her to that point.

Since everything about Shiloh screams deadly outcome, do you think Alexis will take him out? Would she be your pick to gun Shiloh down or would you rather see someone else to the honors? We’ll give you updates as other GH news comes in. Stay tuned to the ABC soap and don’t forget to check CDL often for the latest General Hospital spoilers, updates and news.