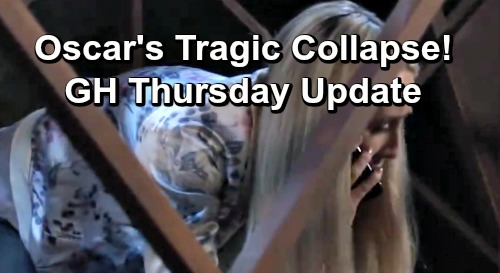 General Hospital (GH) spoilers for Thursday, April 4, tease that Drew Cain (Billy Miller) will get some support from a friend. After he heads to the boxing gym, Drew will meet up with Curtis Ashford (Donnell Turner). Curtis understands that Drew’s dealing with a lot right now, so he’ll just want him to know he’s got his back.

Meanwhile, Dr. Kim Nero (Tamara Braun) will also have a rough day. She’ll reflect on something she won’t be able to do any longer – most likely because Oscar Nero (Garren Stitt) is fading fast. Julian Jerome (William deVry) will comfort Kim as best as he can, but another crushing blow is coming up.

On the footbridge, Oscar will have a sudden seizure and keel over. Josslyn Jacks (Eden McCoy) will be frantic as she calls paramedics to the scene. She’s not ready to say goodbye yet, so she’ll count on Oscar to hang in there and give them just a little more time together.

Once Drew and Kim get updates, they’ll race to GH and hope for more time as well. Oscar’s death is inevitable, but his parents will still hope to put it off as long as possible. Over with Jordan Ashford (Briana Nicole Henry), she’ll receive news about her dialysis. Stella Henry (Vernee Watson) will be the one to deliver it, but her expression will suggest this might be tough to hear.

Jordan could use a kidney transplant immediately, but she’s stuck on the waiting list. She’ll move up eventually, but her situation could get quite dire first. Elsewhere, Laura Webber (Genie Francis) and Dr. Kevin Collins (Jon Lindstrom) will discuss their divorce papers. Alexis Davis (Nancy Lee Grahn) delivered them so Laura will mention that to Kevin and try to figure out where they go from here.

Next, Carly Corinthos (Laura Wright) will catch up with Epiphany Johnson (Sonya Eddy) at GH. She’ll insist that there are some things you never forget, so she could mean taking care of a baby since she’s pregnant. On the other hand, an ordeal like the one Ryan Chamberlain (Jon Lindstrom) put Carly through is certainly memorable. That’s burned in her brain forever just like Ava Jerome’s (Maura West) terrible memories.

General Hospital spoilers say Ava will toss and turn through a nightmare at home. She’ll dream Ryan has come back to strangle her, so she’ll wake up startled and fearful. Jordan will stop by to talk about the Ryan case at some point, which should bring a shock for Ava. Ryan’s ex-fiancée will learn he’s been found, but it he dead or alive? Ava will anxiously await confirmation on that, so stay tuned.

Finally, Lulu Falconeri (Emme Rylan) will face some terrifying moments. She’ll defend herself with a vase as she shouts at someone to stay away from her. Will Lulu fear Ryan’s returned to finish her off? She might if she gets a visit from Kevin while she’s got Ryan on her mind.

Then again, there could be some other explanation. Maybe Lulu won’t actually see who the “intruder” is before she has a meltdown. Laura will be alarmed on Thursday, so she may inadvertently scare Lulu and even spook herself in the process.

Laura should at least be the one who soothes Lulu after the incident. She’ll talk to her daughter about Dante Falconeri’s (Dominic Zamprogna) abrupt exit and the toll this is taking on their family. Laura may want Lulu to join Dante at the estate, but Lulu will probably reject that plan and give Dante the space he needs.