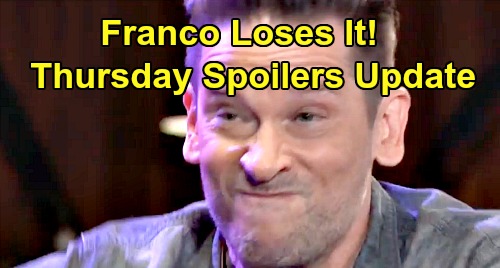 Of course, Brad won’t want Julian leaving for other reasons as well. One is that Lucas and Julian’s father-son relationship is finally on the right track. Another one is that Julian is Brad’s ally. He’s helped keep the baby switch under wraps, so Brad’s stress level may go up without Julian nearby. Put all those things together and we’ll see Brad pleading with Julian to remain in PC.

At GH, Kim will be completely baffled by Franco Baldwin’s (Roger Howarth) behavior. He just planted a kiss, so she’ll eventually pull back and wonder what in the world is going on. Drew Cain (Billy Miller) and Elizabeth Baldwin (Rebecca Herbst) will fill Kim in on Franco trading places with Cameron Webber (William Lipton). Franco became a memory-mapping victim and now remembers Drew’s life until 2012.

While Kim wraps her head around that, Maxie Jones (Kirsten Storms) and Peter August (Wes Ramsey) will be floored. Will this tie in with Franco or perhaps Sasha Gilmore (Sofia Mattsson)? Could it involve Dustin Phillips (Mark Lawson) instead? Regardless, it sounds like a bomb will drop. Peter and Maxie will have to figure out how to handle it.

Other General Hospital spoilers say Franco will head over to The Floating Rib. He won’t feel like he belongs anywhere since he’s Franco but feels like Drew. GH viewers can expect Franco to down a drink and shatter his glass, so he’ll definitely be upset over the situation. A female character will approach Franco and call him by name, but there’s a chance she may hurt more than help.

Across town, Jason Morgan (Steve Burton) and Sam McCall (Kelly Monaco) will learn more about Franco’s jam. Robert Scorpio (Tristan Rogers) will suggest Franco will have to live as Drew unless he wants to risk being a vegetable. His brain could be completely fried if they try to undo Dr. Arthur Cabot’s (Time Winters) work.

Back at GH, Hamilton Finn (Michael Easton) will talk to Valentin Cassadine (James Patrick Stuart) about Cassandra Pierce (Jessica Tuck). He’ll seemingly think Valentin’s too curious about what Cassandra’s up to. Finn may feel like Valentin’s holding out on him or perhaps suspects a link to Sasha’s illness.

Regardless, Valentin will hope to dodge any unnecessary tests and keep Sasha’s DNA details hidden. Sasha isn’t Nina Reeves’ (Cynthia Watros) biological daughter, but he won’t want Nina finding out. At Wyndemere, Hayden Barnes (Rebecca Budig) will have a proposition to make. She won’t want to reveal what she’s searching for, which is what Liesl Obrecht (Kathleen Gati) has demanded.

Naturally, Hayden won’t want Liesl blabbing to Valentin either. She’ll stop Liesl from getting on the phone by making an offer. Hayden will think she might be able to give Liesl something else in exchange for her silence. Liesl will be all ears, but she may wonder what Hayden could possibly have in mind.

Then again, Liesl might take charge and give a suggestion herself! Could Hayden promise a date with Jasper “Jax” Jacks (Ingo Rademacher)? Liesl was quite smitten with him at the softball game and the bar afterward. She would undoubtedly like an evening alone with the Aussie hunk. Hayden might make sure it happens to ensure their secret stays quiet.