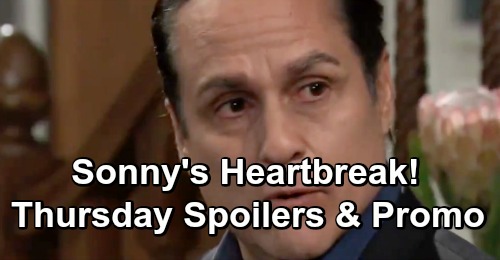 General Hospital (GH) spoilers for Thursday, January 24, tease that Sam McCall (Kelly Monaco) will pull Jason Morgan (Steve Burton) out of the frigid water and make sure he’s OK. Thankfully, Jason is a tough cookie. He’ll be a bit on the weak side after his ordeal, but he’s going to be just fine.

However, Sam won’t want Jason to be alone tonight. She’ll insist that he’s coming home with her, so Jason will obey orders! The idea of spending a quiet evening alone with Sam should be pure bliss. General Hospital spoilers say they’ll enjoy grilled cheese and wine back at Sam’s penthouse. Some sweet moments will lead to extreme passion by the end of the week.

Until then, it seems Carly Corinthos (Laura Wright) will get updates on her bestie’s scare. She should have a mini freak-out, but Jason will undoubtedly assure her that he’s all right. Over the phone, Carly will tell the person on the other end to promise he or she’s not dying. Her tone matches up with how she’d speak to Jason, so it all fits.

Other General Hospital spoilers say Josslyn Jacks (Eden McCoy) will offer an apology. She might feel guilty about the danger Jason ended up in. Then again, this could involve apologizing to Dr. Kim Nero (Tamara Braun) or Drew Cain (Billy Miller).

Josslyn may think she should’ve taken charge and suggested a less dangerous activity. She just wanted to fulfill Oscar Nero’s (Garren Stitt) dying wishes, but that was one bucket list item they should’ve scrapped. Of course, Oscar was a willing participant. He’ll also be sorry in Thursday’s new GH episode, January 24, but he’ll also explain his risky decision to Kim. Oscar just doesn’t want to have any regrets when he dies.

Elsewhere, Mike Corbin (Max Gail) will be confused as usual. His condition is rapidly declining, so Stella Henry (Vernee Watson) will definitely notice. When the topic of marriage comes up, Mike will seem surprised. He’ll think Stella is tying the knot, but she’ll probably just be trying to remind him about Yvonne Godfrey (Janet Hubert).

Marcus Godfrey (Nigel Gibbs) will also have a chat with Curtis Ashford (Donnell Turner) on Thursday. GH spoilers say Curtis may want to clear the air about Stella’s intentions. Her heart’s certainly in the right place when it comes to Mike. Stella wants what’s best for Yvonne as well, so it couldn’t hurt for Curtis to offer a reminder.

That’s especially true since Mike and Yvonne are going to be spending a lot more time together. Sonny Corinthos (Maurice Benard) has been putting off Mike’s official move to Turning Woods, but he can’t do that any longer. Mike’s getting violent and increasingly difficult to handle. It’d be better for Mike to have round-the-clock care and professionals who know exactly what to do.

It sounds like this family will continue to face ups and downs. We’ll keep you posted as other GH news comes in. Stay tuned to the ABC soap and don’t forget to check CDL often for the latest General Hospital spoilers, updates and news.