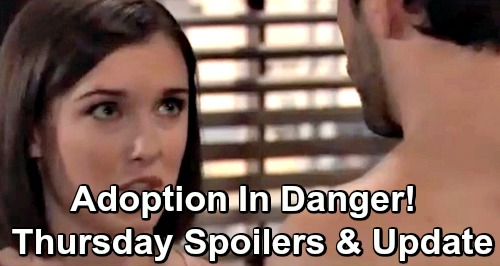 General Hospital (GH) spoilers for Thursday, May 9, tease that Anna Devane (Finola Hughes) will push Robert Scorpio (Tristan Rogers) to back off. It looks like he’ll want to dig into Alex Devane Marick’s (Finola Hughes) history and get proof that Peter August (Wes Ramsey) is her son. However, Anna will order Robert to leave Alex’s past alone. She won’t want Robert stirring up something that could bring regrets.

Anna knows she most likely isn’t Peter’s mother, but she still feels like she is. She believes they’re on the verge of forming a true bond, so it seems she’ll just want to let this go. Over with Lucas Jones (Ryan Carnes), he’ll demand some answers from Julian Jerome (William deVry). Lucas will think Julian must know what’s really going on with Brad Cooper (Parry Shen), so he’ll push him to spill it.

Of course, Julian won’t share the truth, which is that Brad switched their dead baby for someone else’s. He doesn’t know that Nelle Benson (Chloe Lanier) was the other swapper, so he can’t reveal the biggest shocker anyway. Nevertheless, Julian will probably admit he’s heard bad things about DoD. He may agree to talk some sense into Brad, especially since Willow Tait (Katelyn MacMullen) already asked him to.

Meanwhile, Sonny Corinthos (Maurice Benard) and Michael Corinthos (Chad Duell) will take Mike Corbin (Max Gail) out for a meal together. They’ll do some bonding, but Mike’s confusion will bring some awkward moments. Mike will excitedly declare that Michael’s about to become a father. GH viewers know Sonny’s the one who’s going to be a dad again, but Michael will probably just play along.

Still, this could bring up some old wounds for Michael. Despite the kid’s twisted mother, Michael was once quite excited to welcome Jonah Corinthos. Little does he know Jonah’s still alive and living as Wiley Cooper-Jones across town! Over with Alexis Davis (Nancy Lee Grahn), she’ll get some concerning news. Alexis won’t love the idea of Kristina Corinthos-Davis (Lexi Ainsworth) leaving the house just yet.

Naturally, Kristina will offer reassurance. She’ll promise she has no intention of getting reeled in by Shiloh Archer (Coby Ryan McLaughlin) again. Dr. Neil Byrne (Joe Flanigan) may point out that trust is an important part of Kristina’s therapy – true trust, not the kind Shiloh’s been pushing. Alexis needs to have faith that Kristina’s turned the corner, so she’ll give it her best shot.

Elsewhere, General Hospital spoilers say Willow will make another confession to Harrison Chase (Josh Swickard). After he presented his suspicions, Willow admitted “Wiley” was her son.

GH fans know that’s not the case, but Willow will keep operating under that assumption for now. She’ll tell Chase that Shiloh never agreed to the adoption, so this could stir up plenty of problems for his adoptive parents.

At the DoD house, General Hospital spoilers say Shiloh will extend a warm welcome. It appears he’ll greet Dr. Kim Nero (Tamara Braun), who phoned to set up a meeting. Kim wants to talk about Oscar Nero (Garren Stitt) and pick up any belongings he might’ve left behind. Sadly, Shiloh could end up sucking Kim in during a very vulnerable time.

Finally, Jason Morgan (Steve Burton) will tell Sam McCall (Kelly Monaco) that she’s off the hook. Jason couldn’t get Kristina’s pledge back, but he won’t think that matters. As long as Kristina’s safe and free, they can handle the rest – violently if necessary. Jason won’t want Sam putting herself in more danger.

Unfortunately, Sam may be determined to finish what she started. She’s in the prime position to take Shiloh down, so she may not want to give up the fight yet. We’ll give you updates as other GH details emerge. Stay tuned to the ABC soap and don’t forget to check CDL often for the latest General Hospital spoilers, updates and news.