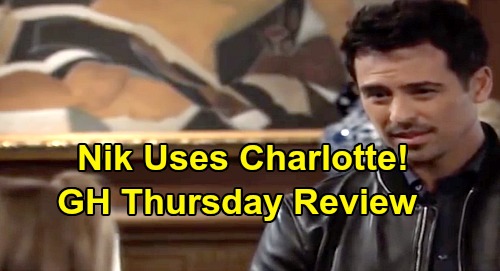 General Hospital (GH) spoilers review for Thursday, November 21, reveal that Ava Jerome (Maura West) returned to her room at Shadybrook to find Valentin Cassadine (James Patrick Stuart) waiting for her. He got right to business, asking her about the portrait of Helena Cassadine (Constance Towers) and reminding her that she owes him for her facial reconstruction.

Ava didn’t take well to Valentin’s visit, and during their conversation she revealed that she “saw” Nikolas Cassadine (Marcus Coloma) on Halloween, which Valentin found weird but not suspicious. He did think, however, that she might have had Nikolas on her brain because she has Helena’s portrait. Ava taunted Valentin a bit, saying that it’s not just Laura Collins (Genie Francis) who’s interested in the portrait, but Jasper “Jax” Jacks (Ingo Rademacher) as well.

Valentin then got in Ava’s face and told her he wanted the portrait and that she could name her price, which prompted her to tell him to get out and that he’d never see the portrait, as it was stored somewhere safe and hidden.

Meanwhile, at Wyndemere, Nikolas entered the living room via a secret entrance, and was almost immediately detected by Charlotte Cassadine (Scarlett Fernandez). She wanted to know who he was and what he was doing there, and Nikolas said that he worked for Valentin and that he’s her secret bodyguard. Charlotte had some questions, and Nikolas answered them all with ease, leading her to believe that he’d be fired if she said anything about him to Valentin.

Valentin then came home from his trip to Shadybrook and embraced Charlotte, while Nikolas slinked away and grabbed a fireplace poker. Nikolas then hid as Valentin called Hayden Barnes (Rebecca Budig) and asked her to come to Wyndemere for a chat. He explained that he has a proposition for her, and that she needed to keep an open mind.

With Nikolas hiding around a corner and listening, Valentin told Hayden that they could be useful for each other. It looks like this means that Nikolas will be present when Hayden and Valentin speak later that evening, but what was Nikolas’ rationale for going to Wyndemere in the first place? Did he want Charlotte to find him, perhaps thinking that she’d ultimately tell Valentin about him and get him off guard?

Finally, Jax received a visit from Nina Reeves (Cynthia Watros) at his house. Turns out, Nina had come to give Jax an invitation to her upcoming wedding to Valentin, but it seemed like she had something else on her mind. Jax promptly told her that he wouldn’t be attending the wedding and they argued, and he mentioned that she just wasn’t seeing things clearly right now.

But Nina then stated that she’s seeing things clearly for the first time, and that he needed to trust her. Jax went on to rant about Valentin being a criminal and blowing up Cassandra Pierce’s (Jessica Tuck) boat, and how being with him could ruin her life. Finally, Jax angrily told Nina that it’s her choice if she wants to marry Valentin, and she replied “What if I wasn’t going to marry Valentin? What if I’m planning on destroying him?”

Now, that’s something that Jax will probably be able to support. We’ll see where this conversation goes, but perhaps Nina will get help from Jax in her quest to bring down Valentin. At any rate, it will probably feel good to at least let someone else know about her plan and help out with the endeavor. But how will Jax be able to help?