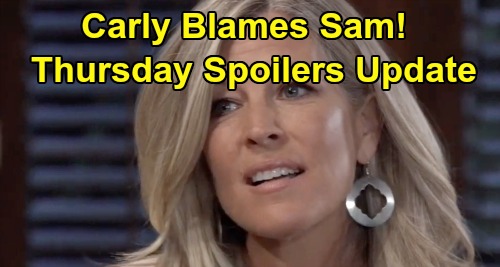 General Hospital (GH) spoilers update for Thursday, November 21, teases that the action’s about to heat up. We should point out that impeachment hearings coverage led to a recent preemption. Wednesday’s episode was pushed back to Thursday, and there’s a chance it could be bumped once again. This is just a reminder in case there’s another schedule adjustment.

Now we can focus on all the drama happening in Port Charles. First, let’s talk about Nikolas Cassadine (Marcus Coloma). He’ll make a trip over to Wyndemere and try to get a grip on the Charlotte Cassadine (Scarlett Fernandez) situation. Nik won’t want the kid blowing this for him, so he’ll craft a clever story to ensure Charlotte’s silence.

Charlotte will be unnerved when she spots Nikolas and realizes he’s the guy from the pier. However, Nik will insist that he works for Valentin Cassadine (James Patrick Stuart). He’ll pretend to be a bodyguard who was hired to protect Charlotte. Nikolas will insist that’s why he was on the pier that night and why she might see him lurking in the shadows moving forward.

Nik will also hope Charlotte’s willing to stay tight-lipped about this. He’ll suggest he could get fired if Charlotte blabs, but he’ll promise to get rid of all the bad guys. At Shadybrook, Valentin will bring up Helena Cassadine’s (Constance Towers) portrait to Ava Jerome (Maura West). He’ll think Ava owes him since he helped restore her beauty, but Ava will be more interested in talking about Nik. She sees him everywhere now.

General Hospital spoilers say Valentin will steer the conversation back the portrait. He’ll point out that Laura Webber (Genie Francis) thinks something’s hidden in it and is going after him. Valentin will know Jasper “Jax” Jacks (Ingo Rademacher) and Hayden Barnes (Rebecca Budig) could spell trouble for him, too. Ava won’t be willing to negotiate any kind of deal with Valentin, so she’ll push him to leave.

At the Metro Court, Hayden will ask Anna Devane (Finola Hughes) about her upcoming nuptials and whether they’re moving forward. Anna won’t get why Hayden would be wondering. She’ll scold Hayden for robbing Hamilton Finn (Michael Easton) of time with his daughter and Violet Barnes (Jophielle Love) of time with her father. There’ll be plenty of tension as Hayden points out that Robin Scorpio-Drake (Kimberly McCullough) turned out just fine.

Hayden won’t be pleased when Anna suggests her situation was different. GH spoilers say Hayden will think they both had their reasons, so Anna will want to know what Hayden’s were. She’ll also be curious why Hayden chose now to resurface with Violet. Anna will assume it was because she was out of town, but she’ll make it clear that she’s got a life with Finn and Hayden shouldn’t get that twisted.

After their confrontation winds down, Hayden will get a call from Valentin. He’ll feel like they can help each other, so he’ll urge Hayden to come hear his pitch at Wyndemere. Nikolas will listen in on the phone call nearby. Over with Finn, he’ll be apologetic after Harrison Chase (Josh Swickard) gripes about the daughter secret. Chase will admit he heard the big news from Robert Scorpio (Tristan Rogers), but he would’ve rather heard it from Finn.

After Finn lets Chase know he’s sorry, he’ll talk a little about fatherhood and show Chase some tea party pics. Finn will hope Chase can visit the next time Violet sleeps over. Meanwhile, Carly Corinthos (Laura Wright) will find out Sam McCall (Kelly Monaco) was sentenced to two years in prison. She’ll console Jason Morgan (Steve Burton), but she’ll insist Sam’s facing the consequences for how she chose to handle all this. Carly will be angry with Sam for not letting Jason deal with Shiloh Archer (Coby Ryan McLaughlin) how he wanted.

Nevertheless, Sam’s stuck behind bars and now the kids need Jason more than ever. Carly won’t want Jason doing anything too risky for their sake. At Jax’s place, Nina Reeves (Cynthia Watros) will stop by with a wedding invitation. Jax will insist he’s not coming and warn Nina about choosing to be with a criminal. They’ll end up arguing, but Nina will ultimately reveal that she’s got Valentin’s destruction in mind, not marriage.

At the Quartermaine mansion, Brook Lynn Ashton (Amanda Setton) will realize she’s walked in on a weird vibe. GH fans know Olivia Quartermaine (Lisa LoCicero) was distraught about Dante Falconeri (Dominic Zamprogna) rejecting her letters and urging her to stop writing. Sonny Corinthos (Maurice Benard) was on hand to offer support, but Brook Lynn won’t get updates on any of that. Instead, Sonny will show off a pic of Donna Corinthos and chat with Brook Lynn briefly.

Brook Lynn will upset Olivia by mentioning Dante, so Olivia will leave the room and get comfort from Ned Quartermaine (Wally Kurth). Later, Ned will let Brook Lynn know he’s pleased to have her back in town. General Hospital spoilers say Brook Lynn’s return will lead to some bombshells, so stay tuned. We’ll keep you posted as other GH details emerge. Stick with the ABC soap and don’t forget to check CDL often for the latest General Hospital spoilers, updates and news.