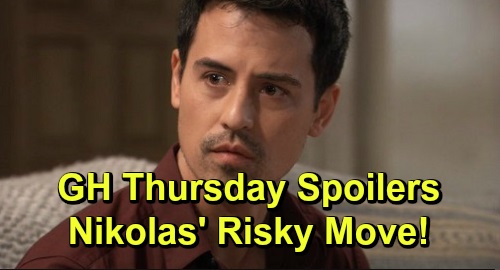 General Hospital (GH) spoilers for Thursday, November 7, tease that Nina Reeves (Cynthia Watros) will sense that something’s bothering Valentin Cassadine (James Patrick Stuart). She’ll try to get to the bottom of Valentin’s troubles, so he’ll admit Jasper “Jax” Jacks (Ingo Rademacher) is behind them. Valentin won’t be able to shake the feeling that Jax is up to no good.

Of course, Jax feels he’s on the right side – Spencer Cassadine’s (Nicolas Bechtel) side. He mostly wants to help Nikolas Cassadine (Marcus Coloma) reclaim what was stolen from him for Spencer’s sake. However, Jax will have another problem to deal with in Thursday’s episode. Josslyn Jacks (Eden McCoy) will insist she wants to move in with her dad, so that’ll leave Jax in a bind.

Ordinarily, Jax would be thrilled to welcome Joss into his home. His secret houseguest is an issue at the moment though, so Jax will have to delay Josslyn’s plans. As for Nikolas, he’ll make waves with Jax once again – it seems by planning to go somewhere. Jax may argue it’s too risky, but Nikolas won’t be concerned. He’ll counter that the odds of him being recognized are nonexistent, so it seems Nik either wants to head to a place where no one knows him or intends to wear a disguise.

Other General Hospital spoilers say Cassandra Pierce’s (Jessica Tuck) confidence will crack. She threatened Nikolas in hopes of securing her escape, so she was pleased when she got added to sudden work detail. Cassandra feels like her threat paid off, but she’ll soon sense that something’s amiss. Total terror’s about to strike for this international criminal!

Sam McCall (Kelly Monaco) will realize something’s up, so she’ll be perplexed on Thursday. She’ll ask if Cassandra’s afraid one of her enemies is going to come get her. Sam won’t seem serious at first, but things will definitely take a serious turn soon. She’ll find herself stuck in Cassandra’s mess before the week’s over.

Back with Nina, she’ll pay a visit to Nathan West’s (Ryan Paevey) grave. It sounds like Nina will want to open up a bit, and dead Nathan is an awfully good listener. Elsewhere, Carly Corinthos (Laura Wright) will praise Sasha Gilmore (Sofia Mattsson) for owning up to what she did. She’ll let Sasha know that goes a long way in her book.

Next, Carly will be summoned for a meeting with Jax. It may start off about Josslyn’s move-in request, but it’ll probably turn into a grilling session. Carly’s already suspicious of Jax, so her questions could prove problematic. General Hospital spoilers say Carly will learn a huge secret in the near future. Whether it’s now or later, it looks like Carly will join the secret Nikolas circle at some point.

At Pentonville, Nelle Benson (Chloe Lanier) will be glad Martin Gray (Michael E. Knight) could meet with her. GH fans know Nelle’s parole was denied, but she’s always got another trick or two up her sleeve. Martin will be curious about a man Nelle considers a man of “dubious distinction.”

Will Nelle be referring to Ryan Chamberlain (Jon Lindstrom)? Did she learn something about deceased Shiloh Archer (Coby Ryan McLauglin) she could use to her advantage? There’s even a slim chance Nelle will get caught in the Nikolas drama since Cassandra’s been in prison, too. Cassandra’s been keeping the Nik secret pretty close to the vest, but Nelle’s always got her eyes and ears open.

Whatever the case, Nelle will have high hopes about her latest strategy. It’ll be interesting to see how it all pans out. We’ll give you updates as other GH news comes in. Stay tuned to the ABC soap and don’t forget to check CDL often for the latest General Hospital spoilers, updates and news.