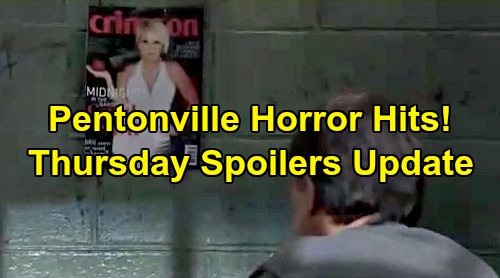 General Hospital (GH) spoilers update for Thursday, October 17, tease that Sonny Corinthos (Maurice Benard) will be curious about the plan. It’s possible Sonny will be talking to Michael Corinthos (Chad Duell), who’s definitely got a plan to save Sasha Gilmore (Sofia Mattsson). However, Sonny will likely be discussing Sam McCall’s (Kelly Monaco) situation with Jason Morgan (Steve Burton). Jason will have a plot to get Sam off the hook – and it could involve Peter August’s (Wes Ramsey) secret helper.

Of course, GH fans know Peter’s accomplice was also Shiloh Archer’s (Coby Ryan McLaughlin) accomplice. Bryce Henderson (Brian Gross) was supposed to kill Shiloh, but the scheme went south. Now Peter’s trying to salvage this by framing Sam, and Bryce is playing a huge role in it through his statement against her.

Jason will pay someone a visit at Pentonville, so it’ll probably be Bryce. GH spoilers say Jason will offer a way out, so he may try to make a deal with Peter’s lackey. His priority is making sure Sam’s free, so he’ll do whatever he has to do. Jason will make it clear that no one’s going to stop him, so Bryce had better cooperate if he knows what’s good for him! Still, Bryce may be torn about betraying Peter, who’s also proven to be deadly.

Meanwhile, Ryan Chamberlain (Jon Lindstrom) will admire Ava Jerome’s (Maura West) Crimson cover. He’ll have it hanging on his cell wall, so he’ll reflect on his love for Ava and consider what’s ahead for them. Ryan certainly won’t be ready to give up hope. Nevertheless, Ryan will end up resorting to the same old brutality behind bars. A violent incident will leave Ryan in chains and awaiting an investigation.

As for Ava, she’ll have to deal with some worried Port Charles residents. Julian Jerome (William deVry) will want to know how Ava’s really doing, but she’ll just want to drink. Ava will ask where the cocktail shaker is and try to put Ryan out of her head. She’d rather drown her sorrows than let her twisted ex invade her thoughts.

Laura Webber (Genie Francis) will also get in touch with Ava, so the pushiness may get annoying. Since Ava’s such an independent gal, she may want everyone to back off. It’s hard enough for Ava to process her own emotions, much less convey them to other people. She did pretty well in her therapy session with Dr. Neil Byrne (Joe Flanigan), but she may not want therapy from everyone she encounters.

Next, let’s talk about Laura’s chat with Kevin Collins (Jon Lindstrom). He’ll be preparing for an important evaluation – one that’ll affect Franco Baldwin (Roger Howarth) and his loved ones a great deal. Kevin will talk about how he has to determine if Franco’s in his right mind. That may not be an easy decision since Franco isn’t Franco in the traditional sense – and he seems perfectly sane as “Drew Cain.”

Over with Scott Baldwin (Kin Shriner), he’ll get ready to fight hard in court. Elizabeth Baldwin (Rebecca Herbst) will battle her nerves, but she’ll get support from her son. Cameron Webber (William Lipton) will even have a strategy to fix all this. He’ll ultimately find Kim Nero (Tamara Braun) in hopes of changing her view, but Kim will remain devoted to “Drew” for now.

Kim will meet up with Franco at some point and clutch his face gently. She’ll suggest that “Drew Cain” never dies and assure Franco they’ll get through this together. Kim won’t know what she’d do if she lost “Drew” once again, so she’ll be determined to avoid it. She’ll count on Martin Gray (Michael E. Knight) to get the job done once they’re in the courtroom.

Finally, General Hospital spoilers state that Brad Cooper (Parry Shen) will be on the hot seat. Lucas Jones (Ryan Carnes) won’t like feeling out of the loop, so he’ll pressure Brad on Thursday. He’ll want Brad to be honest and reveal any secrets he’s hiding. Lucas will think Brad’s holding out on him, but Brad will manage to keep baby switch truth under wraps.

Naturally, Brad’s just delaying the inevitable. General Hospital spoilers say Brad’s deception will be exposed down the road, so he’ll have to pay for his mistakes sooner or later. We’ll give you updates as other GH news comes in. Stick with the ABC soap and don’t forget to check CDL often for the latest General Hospital spoilers, updates and news.