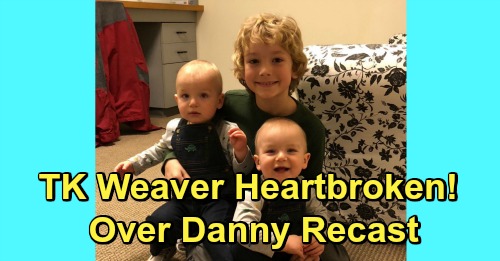 General Hospital (GH) spoilers reveal that one ABC soap star has been recast. GH fans might’ve noticed Danny Morgan looked a bit different in Friday’s episode, May 31. The show chose to rapidly age Sam McCall (Kelly Monaco) and Jason Morgan’s (Steve Burton) son just a bit. Unfortunately, that meant TK Weaver had to go. He was a fan favorite among the soap kid group, so this is definitely sad news!

On Twitter, Weaver spoke out about the change and admitted that the decision broke his heart. However, he wanted everyone to know that he loved his time at GH. Weaver also had some kind words for the new actor playing the part.

“I want to give a shoutout to my amazing @GeneralHospital family,” Weaver said. “I loved being Danny Morgan for 3 years. I learned so much. I wish I could have grown up more on the show but it didn’t happen unfortunately. Good luck to the new Danny!! I hope you all love him too! Truly.”

Weaver sent out several other tweets, including one about how the switch went down. He was informed of the recast a couple weeks ago, but the show requested that he keep quiet until the new Danny aired. Weaver also sent out some heartfelt messages to the costars he worked with the most.

First up was Kelly Monaco. Weaver called her “the most beautiful & classiest set mom a kid could ever ask for.” He also noted that Billy Miller (Drew Cain) was always great about giving him advice. Weaver added that Miller “offered to come to my house and give me a big bear hug if ever I need one.”

Of course, Weaver didn’t leave out Steve Burton. In fact, he gave a special thank you to Burton for the phone call to make sure he was OK. Burton assured Weaver that it wasn’t his fault. Sometimes General Hospital is ready to SORAS characters and that’s just the way it goes. Weaver gushed that Burton is “such a good person” and counted himself grateful to have met him.

Burton and Monaco also reached out to Weaver through some sweet, positive tweets following the episode. Miller doesn’t use Twitter, but Monaco vowed to make sure he saw Weaver’s post. She insisted Weaver was a “DREAM to work with” and let him know he had a bright future ahead. Burton echoed the idea by calling Weaver “a rockstar” and promising he can do anything he sets his mind to.

It’s tough to say goodbye, but it helps to know Weaver’s got so much love and support. Will you miss TK Weaver as Danny Morgan? General Hospital spoilers reveal the drama will continue in Port Charles, so stay tuned. We’ll give you updates as other GH news comes in. Stick the ABC soap and don’t forget to check CDL often for the latest General Hospital spoilers, updates and news.

You’re a rockstar with a bright future! I know you accomplish anything YOU put your mind to. Luv you @tkweaveractor I’ll see you soon! https://t.co/tb6hPVZqWm

TK. You were a DREAM to work with. You are such a talented young man. I know you have a bright future ahead of you. I can’t wait to see your career blossom. I’ll make sure #billymiller sees this post… I know he cares about you as much as I do. You will be greatly missed at #gh