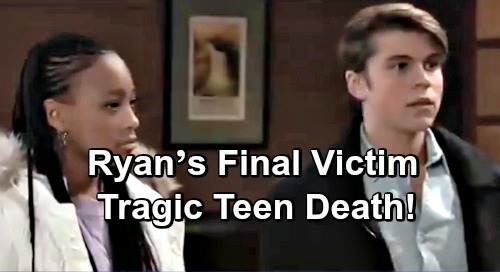 Unfortunately, this happens to be the same hotel Ryan Chamberlain (Jon Lindstrom) is staying at with Ava Jerome (Maura West). That could mean disaster if GH is hoping to squeeze in one more serial killer victim! Down-the-road General Hospital spoilers all have Josslyn, Oscar and Cameron in them. We know they’ll survive this ordeal.

There are some hints about Oscar’s health taking a turn for the worse soon, but that may or may not be related to Ryan. Oscar’s tumor reprieve could simply come to an end. Regardless, Oscar isn’t dying just yet. That blow will be dealt to Joss later, but what if another one’s headed her way now?

General Hospital spoilers don’t have anything to say about Trina, which isn’t too unusual since she’s not one of the main three teens. She’s just an often mentioned one who happened to pop up for this trip. The fact that they suddenly inserted a recast in this story is highly suspicious. Perhaps they have a dark twist in mind for poor Trina!

Another clue came during Cameron and Trina’s latest conversation. In an effort to give Josslyn and Oscar some time alone, Trina and Cam went to the other room to watch a movie. Before they started their flick, Trina noted she didn’t do as much partying as her party girl reputation suggests. She pointed out she was just trying to be cooler, but Cam thought she was cool enough.

General Hospital seemed to be giving Trina a softer moment. That could be so they can tug at our heartstrings a bit more if Trina’s attacked. Wednesday’s GH preview video also shows Cameron asking Trina what he’s supposed to do. It looks like some problem will arise, so it’s possible Trina will tell Cam to stay put and let her handle it.

Separating could bring trouble since Ryan’s around and could still be out for blood. If Trina accidentally spots him checking on Carly Corinthos (Laura Wright) in the trunk, that could seal her fate. General Hospital spoilers say both Cameron and Josslyn will battle guilt after the drama explodes. Will they feel guilty about the death or at least severe injuries of their friend?

It sounds like Trina could be Ryan’s final victim before he’s exposed and wraps up his exciting arc. We’ll give you updates as other GH news comes in. Stick with the ABC soap and don’t forget to check CDL often for the latest General Hospital spoilers, updates and news.