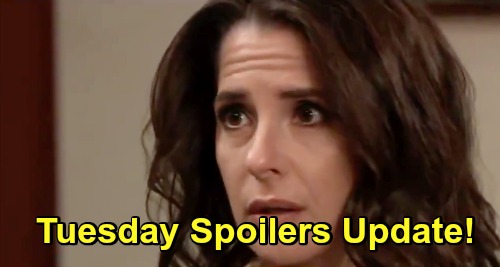 General Hospital (GH) spoilers for Tuesday, April 16, tease that the recent preemption delayed the action. What was supposed to air on Monday will air on Tuesday now, but the drama will be worth the wait. Plenty of exciting GH storylines are about to heat up.

Jason will also mention that Sam McCall (Kelly Monaco) is working an angle of her own. She’ll play dumb at the community house, where Shiloh will be eager to find Kristina. Sam will suggest rummaging through her sister’s room, but Shiloh will seem a tad uneasy. He’ll task Daisy Kwan (Kelsey Wang) with helping Sam, presumably to make sure Sam doesn’t dig too deep!

While they’re on the hunt for clues, Sam will sense that Kristina’s already in over her head. Daisy will mention that no one usually runs off like this. Once you enter the initiation stage, there are consequences if you back out. Sam will grow curious, but she won’t be able to get a lot of info. Daisy will only admit that there’s a pledge, but that’ll be enough for Sam to build on.

Other General Hospital spoilers say Brad Cooper (Parry Shen) will decide he’s really loving all this DoD stuff. He’ll buy right into Shiloh’s philosophies and mention his book to Lucas Jones (Ryan Carnes). Lucas won’t see why Shiloh’s so great, but Brad will insist that they should sign up for a seminar. He’ll think this could be great for their family, but he’s obviously wrong about that.

After Willow Tait (Katelyn MacMullen) nervously listens in, she’ll meet Lucas and inform Brad that she changed her mind about leaving Port Charles. Next, Willow will speak with Michael. She’ll realize she can’t stand by and let Shiloh keep targeting vulnerable women, so she’ll promise to help Kristina if at all possible.

When Willow talks about her awful sexual experience with Shiloh, things will click into place for Michael. He’ll figure out that Shiloh must be the father of Willow’s baby. General Hospital spoilers say Willow will admit that and add that her child didn’t die.

Later this week, Willow will explain that she lied to protect her baby and sought support from the only group she could find. She’ll get some sympathy from Michael, but she’ll likely deceive him about Brad and Lucas adopting her son. However, Michael will hopefully keep putting the clues together and figure that out before long.

At GH, Liz will trust Brad to take care of something. She’ll give him the DoD evidence, but Shiloh’s interference will cause problems. He’ll be looking for Kristina when he finds Brad and sees that familiar cup. Shiloh will turn on the charm and manipulate Brad into doing what he wants. He’ll contend that Dawn of Day always brings out people who want them to fail, especially Jason since he loathes him.

Shiloh will suggest that Brad should just give the cup back to Jason and assure him there were no drugs in it. Dim-witted Brad will follow instructions, so Jason will be perplexed – at least at first. However, Jason will discover Brad’s Dawn of Day connection by the time Tuesday rolls around. That should leave him doubtful about Brad’s claims.

Over with Liz and Franco Baldwin (Roger Howarth), they’ll learn Cameron Webber (William Lipton) fought with another kid who called Aiden Webber (Jason David) a “fairy boy.” Cam will suggest that Aiden isn’t like that, but Liz will contend that labels aren’t something they should impose on him. She’ll object along with Franco when Cameron suggests Aiden shouldn’t be quite so gay.

Across town, Valentin Cassadine (James Patrick Stuart) will want Nora Buchanan (Hillary B. Smith) to take his case. He’ll rant about Lulu Falconeri (Emme Rylan) bailing without notice and demand full custody of Charlotte Cassadine (Scarlett Fernandez). Of course, Valentin will change his tune when he overhears Spencer Cassadine (Nicolas Bechtel) ratting him out for blackmail.

Spencer will fill Nina Reeves (Michelle Stafford) in on Valentin’s tormenting and contend that he’s hiding things about Sasha Gilmore (Sofia Mattsson) as well. That’ll prompt Valentin to enter the room and cover his tracks. He’ll let go of his custody battle idea, but he’ll also give Spencer a stern warning to back off.

Afterward, Valentin will make excuses to explain the Sasha blunder. He’ll tell Nina any money that exchanged hands was only a little extra shopping cash. Back at the DoD house, Shiloh will meet back up with Sam and reveal what he’s learned. He’ll insist that Jason seems to be behind Kristina’s kidnapping, so Sam will have to play dumb once again.