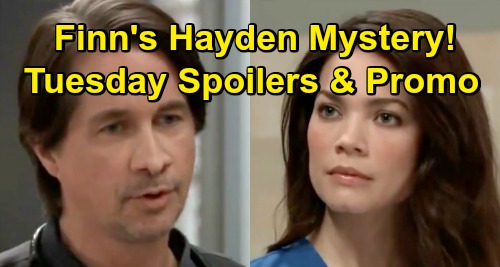 General Hospital (GH) spoilers for Tuesday, April 30, tease that Ava Jerome (Maura West) will demand some answers. Just after Lulu Falconeri (Emme Rylan) pointed out their staged video was trending, Ava got a phone call. As Dr. Kevin Collins (Jon Lindstrom) and the others huddle around her, Ava will try to figure out who’s speaking on the other end.

It’s safe to say Ava will assume it’s Ryan Chamberlain (Jon Lindstrom). Whether she gets confirmation on that or not, Ava will likely think the plan’s working like a charm. Meanwhile, Curtis Ashford (Donnell Turner) will seek more info from Timmy in the alley. He handed over breakfast and money, so he’ll think it’s time for Timmy to tell him everything he needs to know.

Timmy admitted that a woman tried to hire him for the pharmacy break-in. Will Timmy offer any clues about who that woman might be? Curtis will do whatever he can to uncover this shocker and keep following Ryan’s trail.

At GH, Dr. Hamilton Finn (Michael Easton) will have a former flame on his mind. He’ll ask Elizabeth Baldwin (Rebecca Herbst) if she’s heard from Hayden Barnes (Rebecca Budig) lately. Liz probably hasn’t, but you can’t blame Finn for trying. Despite everything that went down, Finn can’t help but wonder about Hayden and how she’s doing.

Elsewhere, Harrison Chase (Josh Swickard) and Valerie Spencer (Paulina Begumbe) will investigate without the DA’s approval. They’ll go rogue for Kristina Corinthos-Davis’ (Lexi Ainsworth) sake, but they could be risking Margaux Dawson’s (Elizabeth Hendrickson) wrath. Of course, Valerie and Chase could run into some trouble with Sonny Corinthos (Maurice Benard) as well, but they won’t let that stop them.

Speaking of trouble, Sam McCall (Kelly Monaco) will have to climb out of some. Shiloh Archer (Coby Ryan McLaughlin) appeared just as Sam was trying to leave the DoD records room and make a quick getaway. Now Shiloh’s got some tricky questions, but Sam will handle them with ease.

General Hospital spoilers say Sam will play dumb and act like she was just curious about that room. Shiloh will warn that Sam shouldn’t be in there, so she’ll pretend to wonder what’s beyond that door. However, Shiloh will probably just remind Sam of her place within Dawn of Day and push her to trust him. Once Sam backs off, Shiloh should feel better about her loyalty.

Next, there’ll be more drama at the safe house. Dr. Neil Byrne (Joe Flanigan) will fill Sonny and Alexis Davis (Nancy Lee Grahn) in on the latest exit therapy snag. He’ll reveal that there’s been a complication, which could tie in with Kristina’s attitude or perhaps Valerie and Chase’s attempt to help her.

Back at GH, Stella Henry (Vernee Watson) will panic when she finds Jordan Ashford (Briana Nicole Henry) unconscious. Jordan’s condition is clearly getting worse, which is why she just collapsed on the floor. Stella will make sure Jordan gets some help, but there’s only so much the staff can do without a new kidney. Jordan needs a transplant ASAP or else things could take a deadly turn.

Finally, Franco Baldwin (Roger Howarth) will have a chat with Drew Cain (Billy Miller). They’ll discuss Oscar Nero’s (Garren Stitt) imminent death and all the difficult feelings that brings. Franco will just want Drew to know he’s there for him, so Drew should appreciate the support.