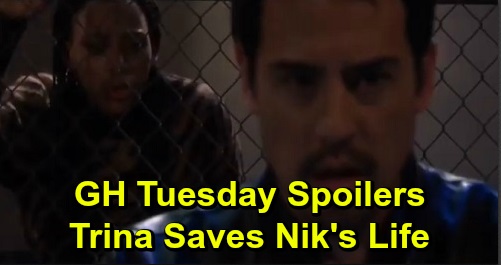 General Hospital (GH) spoilers for Tuesday, December 17, tease that Trina Robinson (Sydney Mikayla) will catch Nikolas Cassadine (Marcus Coloma) in the backroom of the gallery. After she approaches him from behind, she’ll demand to know who he is and what he’s doing there. Nikolas will have to think fast and wiggle out of this tight spot somehow.

Meanwhile, Valentin Cassadine (James Patrick Stuart) will enjoy his big win. GH spoilers indicated that Valentin would emerge victorious at the auction – and he did. That victory just didn’t come the way everyone expected it would. Just before Valentin could make the winning bid, a server spilled a tray of food on him and allowed Laura Webber’s (Genie Francis) final bid to stand. Moments later, the coveted portrait burst into flames!

Valentin will be thrilled since he planned to destroy the codicil anyway. He’ll take a moment to savor this victory and gloat to the other auction attendees. Valentin will insist that the codicil is gone along with all its many secrets. Of course, Valentin shouldn’t be so sure about that! This is obviously a step in Ava Jerome (Maura West) and Nina Reeves’ (Maura West) secret plan, so that codicil can’t really be gone.

In Tuesday’s GH preview video, Ava’s got a martini in her hand and a smirk on her face. She asks, “Now why would I do a thing like that?” Perhaps Jasper “Jax” Jacks (Ingo Rademacher) or someone else will confront Ava about rigging the fire. General Hospital spoilers say Ava will play it cool and count on the rest of her plan going perfectly.

As for Valentin, he’ll get called away to deal with a family matter soon enough. Charlotte Cassadine (Scarlett Fernandez) was eager to prove her secret bodyguard was real, so she jumped in the water down by the pier. Rocco Falconeri (O’Neill Monahan) was stunned by Charlotte’s drastic action, but now all he can do is yell for someone to save her.

General Hospital spoilers say Dustin Phillips (Mark Lawson) will take off his coat and play rescue ranger. He’ll tell Lulu Spencer (Emme Rylan) to call 911 just before he dives in to save Charlotte. Over with Peter August (Wes Ramsey), he’ll anxiously await updates on Franco Baldwin’s (Roger Howarth) memory procedure. Peter is hoping Franco will wake up as himself, but he has no guarantee of that. He’ll speak with Anna Devane (Finola Hughes) as he hopes for the best on Tuesday.

Elizabeth Baldwin (Rebecca Herbst) is also hoping Franco is back to being Franco again. Since his eyes just fluttered open at GH, Liz will ask him a few questions on Tuesday. She’ll wonder if Franco remembers her – and it appears he will. Franco will face a crushing blow later this week, so he’ll probably hear all about Drew Cain’s (Billy Miller) death.

There’ll be a lot for Franco to catch up on, so don’t miss what’s in store. We’ll keep you posted as other GH news and rumors emerge. Stick with the ABC soap and don’t forget to check CDL often for the latest General Hospital spoilers, updates and news.