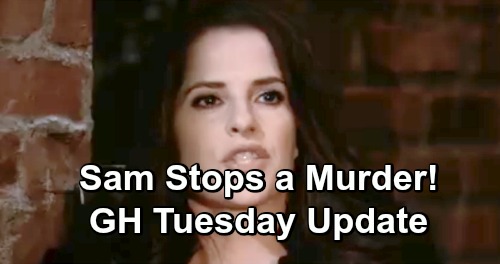 General Hospital (GH) spoilers for Tuesday, March 26, tease that Jason Morgan (Steve Burton) will tighten his grip on Shiloh Archer’s (Coby Ryan McLaughlin) neck. Shiloh pushed Jason too far and found himself in a chokehold, so the situation is growing dire. Thankfully, Sam McCall (Kelly Monaco) will arrive before Jason can strangle Shiloh to death. The last thing Jason needs is to go down for murdering this guy!

Unfortunately, Jason won’t be able to avoid facing charges. General Hospital spoilers say Jason will be taken into police custody soon. Sam will have to decide who she’s going to support, so it’ll probably be Shiloh that she backs up. She certainly won’t want Jason to be arrested, but she’ll have to act like she does to keep her plot in play.

Alexis Davis (Nancy Lee Grahn) was all set to fill Jordan Ashford (Briana Nicole Henry) in on Sonny Corinthos’ (Maurice Benard) plans, but she won’t. Instead, Jordan may get another call about the altercation outside Kelly’s. At Sonny’s place, Alexis will hang up and urge him to give her the scoop. She’ll want to hear how Sonny and Jason intend to protect Kristina Corinthos-Davis (Lexi Ainsworth).

Alexis won’t think Sonny should resort to violence, but he may remind her of what’s at stake. Their daughter thinks Shiloh the narcissist is the greatest person alive, so there’s no predicting what orders she might obey. Sonny will want to offer protection by any means necessary, but Alexis may continue to have reservations.

Other General Hospital spoilers say Harrison Chase (Josh Swickard) will be feeling blue. He promised to defend Willow Tait (Katelyn MacMullen) and her baby from Shiloh, but he can’t do that if she doesn’t stick around. It looks like Willow will refuse to stay initially, so Chase will meet up with Dr. Hamilton Finn (Michael Easton) to vent.

Luckily, a change of heart’s coming up for Willow. She’ll decide to remain in Port Charles and let Chase protect her. Of course, they’ll be able to continue their new relationship as well. Chase will be over the moon, but Anna Devane (Finola Hughes) will face sorrow across town. She’ll deal with Peter August’s (Wes Ramsey) cruel rejection, but she’ll do her best to get through to him.

Peter won’t get why Anna’s even bothering with this. He just won’t see the point in getting to know each other any better. Peter seemed open to the idea just before Anna went blind, so this sudden shift is puzzling. Nevertheless, Anna will tell Peter that she’s his mother and that’s reason enough to want to be in his life. She’ll hope they can build a solid bond in time.

However, a memory manipulation bomb should drop sooner or later. Alex Devane Marick (Finola Hughes) is most likely Peter’s bio mom, so that’ll be a tough blow for both Peter and Anna. A letter Anna receives on Tuesday could put her on the path to the truth.

Dante won’t be happy about Peter getting too close to Nathan West’s (Ryan Paevey) son. He’ll feel like little James West should be off-limits, but Maxie won’t see the harm. GH spoilers say Dante will battle some anger issues and some deep pain. As Dante’s mission continues to haunt him, a surprise party and some other close encounters will shake things up.