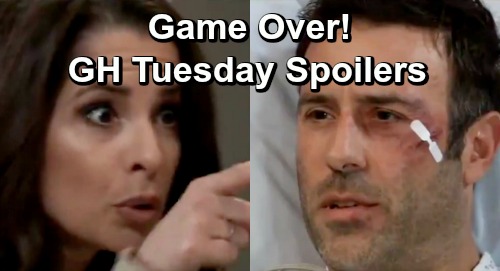 General Hospital (GH) spoilers for Tuesday, May 28, tease that some bombshells are coming up. We should note that Monday’s episode will be a repeat, but Tuesday will resume all the action. Ryan Chamberlain (Jon Lindstrom) might’ve been taken into custody unharmed if he hadn’t taunted Ava Jerome (Maura West). He insisted she loved him and couldn’t pull the trigger, so she plunged a knife straight into his back!

That should bring some desperate moments as they try to get Ryan to GH before his death. Later, Jordan Ashford (Briana Nicole Henry) will awaken and notice the look on Curtis Ashford’s (Donnell Turner) face. She’ll be off the ventilator, so it looks like this may be after a successful transplant surgery. Jordan will wonder what Curtis isn’t telling her, so he may reveal Ryan as her shocking kidney donor.

Of course, Curtis will also have to explain that Ava tried to kill Ryan. At the police station, Scott Baldwin (Kin Shriner) will snap at Ava for putting herself in this predicament. He’ll angrily point his finger and argue that if Ryan dies, Ava will face a murder rap. However, Ava won’t look too broken up about it. As far as she’s concerned, it was worth it.

Other General Hospital spoilers say Julian Jerome (William deVry) will seem on edge. Dr. Kim Nero (Tamara Braun) will assume he’s trying to spare her more drama. She won’t want Julian keeping things from her just because she lost Oscar Nero Quartermaine (Garren Stitt). Kim will gently insist that she wants to know if Julian is in trouble.

Unfortunately, this doesn’t seem like something Julian will want to share. He’s worried Lucas Jones (Ryan Carnes) and Brad Cooper (Parry Shen) could lose “Wiley Cooper-Jones,” but that’s a complicated story that Kim shouldn’t hear. Over with Kristina Corinthos-Davis (Lexi Ainsworth), she’ll struggle with guilt over her pledge. Alexis Davis (Nancy Lee Grahn) will notice her daughter’s uneasiness and wonder what’s up.

Kristina will admit that there’s something about Dawn of Day that she hasn’t told Alexis. Dr. Neil Byrne (Joe Flanigan) will eventually help with this conversation. He’ll push Kristina to share what’s bothering her, so Kristina will divulge that her trust offering could hurt Alexis.

Neil will also be curious about how Shiloh Archer’s (Coby Ryan McLaughlin) takedown is coming along. Alexis won’t have much info to offer just yet. She should be stunned when she ultimately gets the specifics. At GH, Jason Morgan (Steve Burton) will talk to Monica Quartermaine (Leslie Charleson). He’ll point out that he needs proof Shiloh drugged Sam, so he could really use her assistance.

The drugs in Sam’s system should show up no problem, but Jason may want the cup from Dawn of Day tested – for real this time. If they can confirm where it came from and connect it to Sam’s drugging, they could use it to get Shiloh locked up. Alas, this DoD story isn’t ending anytime soon. It sounds like Shiloh will manage to avoid legal woes for now.

Of course, that doesn’t mean Shiloh will avoid Sam’s wrath. She’s already tormented by what she went through, so Sam will confront Shiloh in his room at GH. General Hospital spoilers say he’ll be pleased to see Sam’s face when he wakes up, but she’ll quickly make her intentions clear. Sam will declare, “Game over, Shiloh! You lose!”

Shiloh’s empire should indeed crumble sooner or later, but Sam shouldn’t be so sure it’ll happen right away. There’s much more chaos to come, so don’t miss what’s in store. We’ll give you updates as other GH news comes in. Stay tuned to the ABC soap and don’t forget to check CDL often for the latest General Hospital spoilers, updates and news.