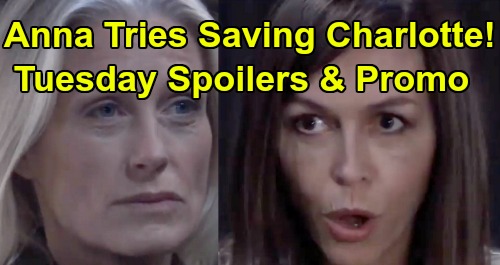 General Hospital (GH) spoilers for Tuesday, November 12, tease that Hamilton Finn (Michael Easton) will open up to Hayden Barnes (Rebecca Budig). He asked if he could carry sleeping Violet Barnes (Jophielle Barnes) to the guest room before they did the dishes, and Hayden agreed. It was a sweet moment that Finn clearly appreciated.

Finn seems to be loving every second of having Violet in his life, so he’ll probably acknowledge that on Tuesday. He may confess how much he already loves Violet and assure Hayden that he wants to be there for her. All of this will be a dream come true for Hayden. She’ll be glad the secret’s finally out so Finn can get to know his little girl.

Meanwhile, Peter August (Wes Ramsey) will overhear Maxie Jones (Kirsten Storms) and Lulu Spencer (Emme Rylan). They’ll undoubtedly be discussing something related to missing Charlotte Cassadine (Scarlett Fernandez), but Peter won’t agree with their conclusion. Maxie and Lulu might blame themselves for not paying attention to Charlotte, who was doing her homework at the counter when she got snatched.

Then again, Peter might find himself in a position where he has to defend Valentin Cassadine (James Patrick Stuart). Whatever the case, Peter will tell Maxie and Lulu he doesn’t buy something for one second. He might shut down any negative thoughts and focus on Charlotte’s safe return, which will hopefully be imminent thanks to Anna Devane (Finola Hughes).

Anna just made an exciting return on the pier, where she ordered Cassandra to unhand Charlotte. In Tuesday’s GH episode, Cassandra will wonder what’s in it for her. General Hospital spoilers say Anna will try to reach an agreement with Cassandra. She’ll promise that if Cassandra lets Charlotte go, then she’ll allow Cassandra to walk free.

Cassandra will naturally be hesitant to trust Anna, but the offer should be tempting. One way or another, this kidnapping crisis will soon be resolved. Until then, Jason Morgan (Steve Burton) will put Valentin on the hot seat. He’ll grill Valentin about Cassandra and try to figure out if there’s more to the story.

However, it’s Jasper “Jax” Jacks (Ingo Rademacher) who knows the most right now. He’s holding out on Jason, but what about Carly Corinthos (Laura Wright)? How long will Jax keep her in the dark on his Nikolas mess? Not much longer based on General Hospital spoilers!

At some point this week, a deal will be made between Jax and Carly. We also know Carly will learn a massive secret soon, so it seems Jax will spill the Nikolas truth any day now. Carly will have to keep her mouth shut, which should be tough once Sonny Corinthos (Maurice Benard) grows suspicious.

It sounds like some fantastic scenes are coming up. We’ll give you updates as other GH news emerges. Stay tuned to the ABC soap and don’t forget to check CDL often for the latest General Hospital spoilers, updates and news.